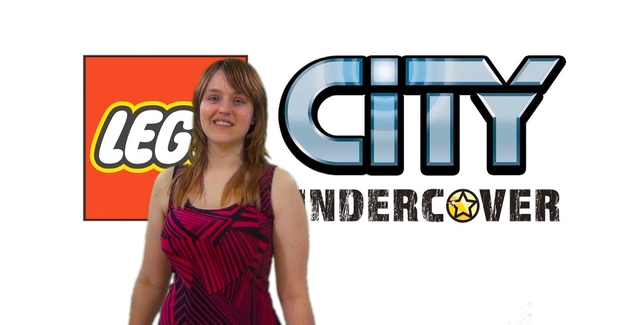 I’ve had a very generically geeky childhood, including playing with LEGOS, sci-fi and adventure flicks, and video games. Nothing gets more nostalgic for me than a combination of those three hobbies. So it goes without saying: I have been a huge fan of the LEGO games based on movies, starting with LEGO Star Wars. LEGO City Undercover continues the tradition with a cheesy 1970s cop flick theme. It is somewhat disappointing that TT Fusion decided to go in the direction of “Super Cops” instead of hitting the long-needed-to-be-resuscitated “Foxy Brown” genre. But, a game developer taking a leap and trying something a little different? Yeah, that happens.

Undercover’s story is filled with puns, parody, and borrows from just about every big action movie out in the past 30 years. Chase McCain, a detective with a murky past, has returned to LEGO City after accidentally outing his witness on live television. Chase plans to buckle down and set things right when his arch-nemesis, Rex Fury, breaks out of prison. Armed with a communicator and several disguises, Chase runs around LEGO City, often acting more like a criminal than a cop – but sometimes going ‘by the book’ just isn’t an option.

Chase can flag down any vehicle, and there are plenty to choose from. Everything from delivery scooters, to race cars, to fire trucks is at the disposal of an officer! I only wish they were all equally fun to drive and found myself constantly on the lookout for a motorcycle. I needed something easy to handle after I realized I would spend a huge chunk of the game just driving to distant markers on the pretty impressive map. This is amended only by the super fun car chases, which were surprisingly exciting. LEGO City Undercover’s gameplay is very similar to the Grand Theft Auto series, in which I pretty much just ran from the cops for hours.

I also had a lot of fun chasing down villains and arresting them. The combat is simple but can be fun to take on a group of baddies. Chase can block, punch and wrestle foes to the ground. It is not overly complicated, and that’s just fine with me. One can not simply go around in a police uniform and expect to bust up some criminal masterminds, you need disguises! There are nearly 300 total, but Chase gets eight main disguises: Civilian, Police, Robber, Miner, Astronaut, Farmer, Fireman, and Construction worker. Things progress pretty smoothly until Chapter 4 and then the game grinds to a slow crawl.

Everywhere you look, the map is loaded with activities or areas restricted to the latter four disguises. So that means, I should’ve spent zero time exploring the huge map until MUCH later in the game AND I would have to revisit every single area to reach 100% completion. This realization hit me by Chapter 6, which meant I reached 20% completion by exploring areas that I would have to come back to later. There just wasn’t any motivation for me, at that point, to even care about 100% completion. Between the incredibly slow loading times and slightly too-frequent cut scenes, any enthusiasm I had for this game was sapped out.

I did something I hate to do. I looked up a walkthrough to ascertain when the next disguise would become available. I was relived to find out the Astronaut disguise would be available after the mission I was on. Truthfully, I don’t know if I could have mustered up the desire to play any more of this game if I hadn’t found that out. It is pretty typical of a Nintendo adventure game to have locked areas that can be revisited as the protagonist gains new abilities. The tricky part is, timing those new abilities so the player doesn’t get disheartened. For me, that timing was off by just one mission.

Graphically, LEGO City Undercover is simple, colorful and fits in well with Nintendo’s other series. The City is impressive with a lot of diversity among the people, buildings, and cars. They didn’t try to get flashy with a lot of detailed textures or complicated shapes, and the everything fits perfectly into a LEGO world. Another down side of the cut-scenes is the camera zooms in to the characters, highlighting some issues. From the zoomed out perspective during gameplay, this problem all but disappear and everything appears smooth.

The voice acting in LEGO City Undercover is just top-notch. The simple designs of the characters leave a lot to be desired for expressing emotion and the actors really step in and bring the story home. A lot of the jokes would fall completely flat if their actors weren’t up to stuff. Luckily, they rock. Speaking of rocking, the soundtrack ain’t too shabby either. The sound track is funky fresh and fits each scene perfectly, especially the “detecting” music.

The best part of this game is the car chases, hands down. There just needed to be a lot more of them.

The worst part has to be the loading screens. As disappointing as the lack of multiplayer was. Not only are the loading screens painfully long, but there’s nothing to them at all. Just a rotating badge, on the TV and on the controller screen. Come on, don’t tell me that’s the best they could come up with! Give me a mini-game, some tips or tricks, rotating characters or vehicles – something!

There is a lot to see and do in LEGO City, so much so that I don’t feel the need to replay the game, as much as I want to keep a file to work on getting one hundred percent completion.

I really like that TT Fusion made LEGO City Undercover in the style of GTA, toned down the violence considerably and completely switched the moral undertone of the game – without removing the fun of the genre. I could comfortably give this game as a gift to a youngster and not worry about upsetting their parents or corrupting that child’s pure, innocent mind,

I recommend this game to fans of previous LEGO games and GTA games, you will find LEGO City Undercover very familiar. Kids will love this game, and it seems to be made with a younger audience in mind. Movie buffs and pun lovers will really get a kick out of the humor in LEGO City Undercover.

Add 1 point to the final score if you don’t mind long loading times. Whenever the load screen comes up for a minute or so, instead of waiting, I always end up getting a drink, snack or checking my phone messages and whatnot. — The fun factor is through the roof with LEGO City Undercover, it’s fantastic fun for all ages! 😀 -Ferry