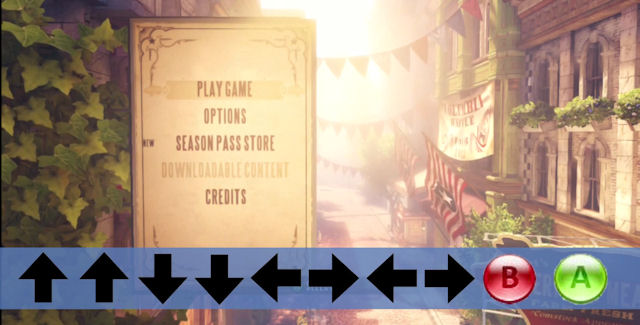 Let’s take a look at some funny BioShock Infinite easter eggs! They can be found if you know where to look! 🙂

Easter eggs have been confirmed for BioShock Infinite. Watch footage of them all below.

To see how it’s done, watch this video:

To quote him as to why it’s unlockable in the game:

“We want people to be able to play the game as they choose, and that’s what this mode is all about. We’re being cautious about making sure a shooter guy who plays maybe two shooters a year doesn’t stumble into it and say, ‘Oh, what’s 1999 Mode?’ And the first time they boot up the game, they go into it and they don’t necessarily understand it because they don’t have that legacy. Then they get their ass kicked because they don’t understand the importance of [the choices they’re making], and they say ‘I give up, this game’s stupid.'”

The Wrench, your trusty weapon in the original BioShock can be found in BioShock Infinite.

It’s located just after acquiring the “Murder of Crows” Vigor; right next to a gear piece you can collect.

The game’s developer Irrational Games makes fun of the many delays Bioshock Infinite had during its development. In the game’s arcade, if you wait around, Elizabeth go and do her own thing and start to play with one of the Flintlock arcade games and mention this new game has been delayed several times, a clear reference.

Have you found any BioShock Infinite easter eggs?