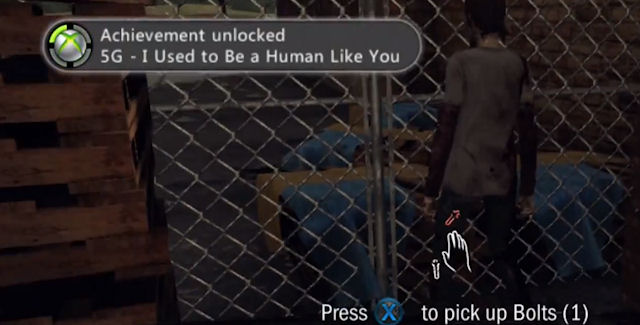 Let’s take a look at some funny The Walking Dead: Survival Instinct easter eggs! They can be found if you know where to look! 🙂

Easter eggs have been confirmed for The Walking Dead: Survival Instinct. Watch footage of them all below.

Once you get the the crossbow near the end of the game, you can for the first time “Shoot a Walker in the Knee with a Bolt”, which will unlock The Elder Scrolls IV: Skyrim funny meme achievement/trophy titled “I Used to Be a Human Like You”. This is a reference to the guards in Skyrim often repeating the same line: “I used to be an adventurer like you, then I took an arrow in the knee”. Which became an internet meme.

You can do this on any Walker that’s got its back to you. Try and get up close behind a Walker, because the crossbow is delayed when fired. Shoot around the knee area and it’ll most probably go in their leg.

Have you found any The Walking Dead: Survival Instinct easter eggs?