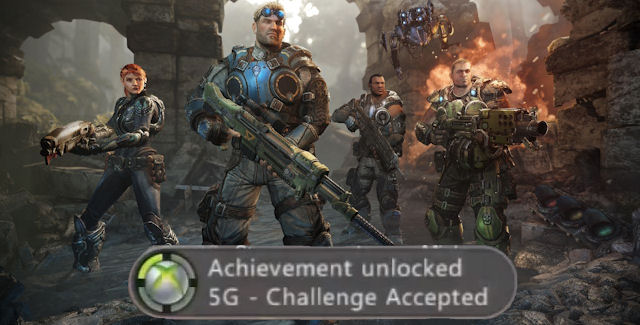 The Gears of War Judgment achievements guide lists every achievement for this Xbox 360 third-person shooter game and tells you how to get and unlock them.

1. They Called Him Karn (10G) — Completed Museum Of Military Glory

This video guide shows how to complete the “Old Town” section for Gears of War: Judgment on Insane difficulty, with 3 stars, and finishing the Declassify challenge.

This is available at the Main Menu by going to Campaign, selecting Aftermath, and watching the Teaser.

Tip: You’ll need to get 38 or 40 Stars during the main campaign missions, in order to unlock this second campaign called Aftermath.

Location: This can easily be done during the very first section of the campaign during Chapter 1: The Museum of Military Glory, Section 1: Old Town.

You’ll start off with some story, and come to a burning tree and encounter your first enemies. Use the chainsaw to kill 3 of them in a row to unlock Lumberjack – Chainsawed 3 opponents or enemies in a row.
Now, continue to move through the mission, making sure to trigger the declassified mission as well. During the next section, you’ll want to run through as much as possible until you see an E-Hole open up in front of you. As it opens, and enemies begin to come out, throw a frag grenade into the hole to get: Plug That Hole – Closed an E-Hole with explosives and Clusterluck – Killed multiple opponents or enemies with one grenade. You should have now unlocked the achievement.
If you were unsuccessful, you can restart your last checkpoint or get 3 headshots in a row to get: Hat Trick – Scored 3 headshots in a row without dying.
Note: The achievement will unlock in-game, and you are free to restart checkpoints.

From the Main Menu go to Stats & Awards, once there head to the Medals tab and select any unlocked Medal title.

39. Unstoppable (50G) — Achieved level 50 a third time and chose to re-up for another tour

40. Death to Locust (10G) — Killed with all classes of COG in Overrun or Survival

46. All Rounder (10G) — Won one match in Free For All, Team Deathmatch, and Domination

Special thanks to NGW, ISGaming, Daxbeastxgamer & Maka for the tips & guide videos.

Please comment if you have any Gears of War Judgment achievement unlock tips of your own. Kudos will be given. – Thanks for visiting!