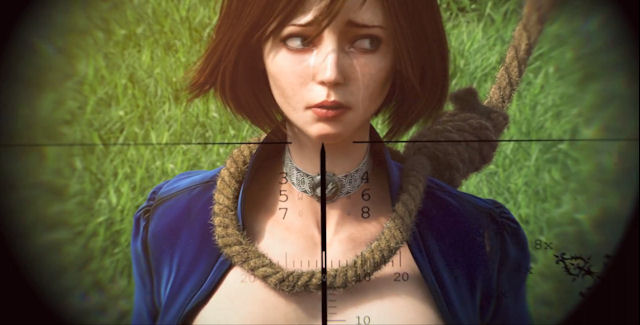 Watch as Booker DeWitt, with weapons in one hand, and powerful vigors in the other, takes a death defying leap onto the Sky-Line, to rescue Elizabeth from the floating sky-city of Columbia. BioShock Infinite, out worldwide on March 26th, 2013 for PC, Xbox 360 and PlayStation 3.

The song featured in this commercial is “Beast” from Nico Vega’s new Fury Oh Fury EP.

I like how it shows Elizabeth and Booker must work together to survive in the city.

The game’s creators at Irrational Games have been experimenting by showing off the game in different visual styles. Next, you’ll see a two-part 80’s documentary style history lesson about Columbia, the city in the air the game takes place in.

Description: “In this “Truth From Legend” segment, Alistar Bloom attempts to unlock the mysteries of Columbia, and reviews artifacts that pose new and troubling questions about the city.”

Description: “Alistar Bloom further explores the mysteries surrounding the floating city of Columbia in this “Truth from Legend” segment. What is the “Songbird” — and how is it connected to the enigmatic “Lamb of Columbia”?”

Are you excited for BioShock Infinite?