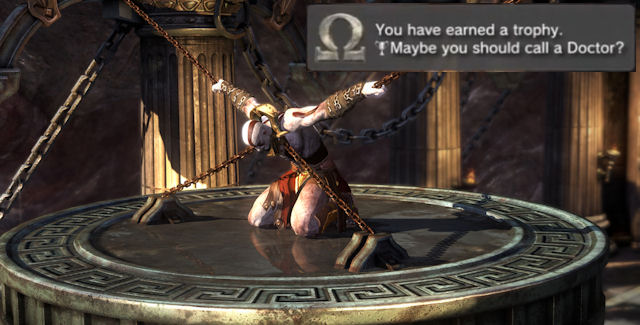 The God of War Ascension trophy guide lists all trophies in this PS3 hack ‘n slash action-adventure game and tells you how to get and unlock them.

1. Champion of the Gods (Platinum) — Unlock all Trophies

2. Big Spender (Bronze) — Upgrade any Magic to the next level

3. Swinger (Bronze) — Ring out an enemy with the Club

Location: Chapter 19 – The Foot of Apollo
The easiest place to do this is in chapter 19. Here you will have to use a lever to activate a platform. The platform will then start to move and harpies attack you. Press Circle to punch one of them with the club and they will fall down into the ocean and die.
Please note: the club is at the very end of chapter 18, after solving the chain puzzle. If you do it via chapter select load up chapter 19 first to check if you already have the club in your inventory or not. If not, then you need to replay chapter 18.

4. Tools of the Trade (Bronze) — Use All 5 World Weapons in Combat

Tip: To find them all, check out our God of War Ascension World Weapons Locations Guide.

7. You Bastards! (Bronze) — Treat the Martyr of Hecatonchires poorly

Location: Chapter 17 – Martyr’s Chamber
This can be done in the very beginning of chapter 17. When opening the torture apparatus a dead body will fall out. You would actually need to take it upstairs and throw the corpse on the pressure plate below. For this trophy you need to do the opposite. Do not activate the pressure plate. Instead, just jump on the cage that is attached to the Martyr and it will rip out his arms.

8. Tell Me How You Really Feel (Bronze) — Kill 25 Enemies using the Rage of the Gods

9. Fireproof (Silver) — Complete the Screw of Archimedes without getting hit by the Fire Traps

Location: Chapter 21 – The Forearm of Apollo
At the very end of chapter 21 you will enter the “Screw of Archimedes”. You need to use the Oath Stone of Orkos on the pressure plates to activate the elevator. Stay away from the fire and block all incoming attacks until you reach the top. Once on top, there is no more fire and you can take your time to kill all enemies. After they are all dead the path to the next chapter unlocks and you will earn the trophy.

10. Light as a Feather (Silver) — Collect all of the Phoenix Feathers

Tip: To find them all, check out our God of War Ascension Phoenix Feathers Locations Guide.

11. The Eyes have It (Silver) — Collect all of the Gorgon Eyes

Tip: To find them all, check out our God of War Ascension Gorgon Eyes Locations Guide.

13. Lubed up (Silver) — Complete the slide in the Statue of Apollo without dying

Location: Chapter 24 – The Shoulder of Apollo
This can be done at the end of chapter 24. After fighting multiple waves of Juggernauts and other enemies you will have to repair a part of the Apollo Statue and then you will be inside a room with some red and green orb chests. The slide section starts when leaving this room. Simply complete the slide without falling down. You may not restart checkpoints or go back to the main menu! If you die you need to replay the entire chapter via chapter select!

14. No Drake. You can’t have these. (Gold) — Collect all Artifacts in the game

Tip: To find them all, check out our God of War Ascension Artifacts Locations Guide.

15. If it ain’t broke… (Gold) — Reconstruct all of the Decayed Chests

Tip: To find them all, check out our God of War Ascension Decayed Chests Locations Guide.

18. Gotta Hand It To You (Bronze) — Defeat the infected Hand of Aegaeon

20. Round and Round (Bronze) — Solve the Rolling Crusher Puzzle

Location: Chapter 5 – The Village of Kirra
Towards the end of chapter 5 you will have to pull down a pillar to progress to the next area. Instead of jumping up to the next level you need to stay where you are and go all the way down the ruins until you reach a secret room with a rotating machine. In the middle of this room is a platform with three cranks. Use all of them to slow down the rotating machine and jump up to the white and red chests. There is a lever between these chests. Pull it and the trophy will unlock.

21. Open Minded (Bronze) — Win the Buttonless MiniGame against a Juggernaut

Location: Chapter 5 – The Village of Kirra
This can be done in the very beginning of chapter 5. The first enemy you encounter is a Juggernaut. Juggernauts look like Elephant Warriors. Hit the Juggernaut until you see the red finisher icon. Press R1 to start the minigame and quickly press Square or Triangle. The Juggernaut will attack you during the minigame. You need to evade with the left stick and keep attacking until it is dead.

Location: Chapter 19 – The Foot of Apollo
A great place to do this is in the very beginning of chapter 19. Immediately after the chapter starts you need to push a rock out of the way to continue to the next area. Instead of pushing the rock away you need to attack it with the Lightning of Zeus, which you do by using it with the L1 + Square special attack. Each attack gives you 4 hits! It will take 6 minutes to farm 1000 hits. There are no enemies nearby, so nothing can break your combo.
You have to upgrade the Lightning of Zeus to the second level to unlock this special attack!

23. Snakes on a Train (Bronze) — Ride the snake back to the Tower of Delphi

24. Hot Lunch (Bronze) — Win the Buttonless MiniGame against a Manticore

Location: Chapter 9 – Ice Caverns
This can be done at the end of chapter 9. Here you will encounter your first Manticore. Manticores are big, purple colored, flying enemies. Hit the Manticore until you see the red finisher icon. Press R1 to start the minigame and quickly press Square or Triangle. The Manticore will attack you during the minigame. You need to evade with the left stick and keep attacking until it is dead.

29. Biting the Hand that Feeds You (Silver) — Defeat Megaera and the Titan Hecatonchires

30. Maybe you should call a Doctor? (Silver) — Keep the Rage Meter Filled for 2+ Minutes

Location: Chapter 1 – Prison of the Damned
The Rage Meter is displayed in the bottom right corner. You can fill it by attacking enemies without being hit. Shortly after chapter 1 starts you will enter the prison and see a cutscene where a bug infects a prisoner. Here you are supposed to learn how to grapple enemies. However, for this trophy you want to ignore this entirely. Do not grapple the enemy. Instead, keep killing it. The enemy respawns over and over again as long as you don’t do a grapple & throw. Avoid being hit and keep attacking for 2 minutes.

Note: This trophy was previously called “Bros before Hos”, but was changed by Sony through a patch at the request of reviewers who found the joke title insulting, which contextually in the story wasn’t even the case. Yet they have no problem watching Kratos rip everyone who crosses him a new one. *confused*

33. Blind Justice (Silver) — Use the Eyes of Truth successfully

34. Next time use the stairs (Gold) — Complete the Gauntlet of Archimedes

Please comment if you have any God of War Ascension trophy unlock tips of your own. Kudos will be given. – Thanks for visiting!