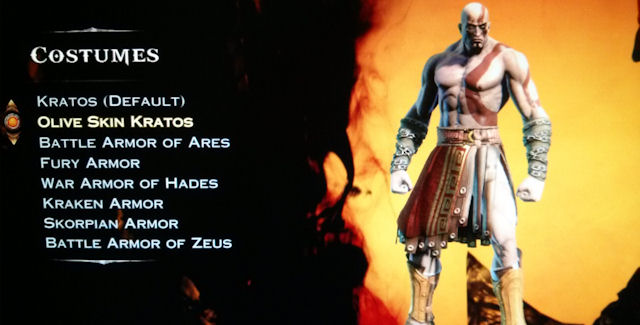 Looking for God of War Ascension Costumes? The following guide will help you get all unlockable Costumes, Alternate Outfits, Armor & Skins in this latest God of War game on the PS3.

You find most of the unlockable costumes by progressing in the game, and the last few are pre-order DLC. Among other costumes, they include the Battle Armor of Zeus & Ares.

How to unlock all God of War Ascension Costumes is shown in the below guide.

All these in-game God of War Ascension unlockable Costumes are listed below.

To unlock costumes, you’ll mostly be busy finishing the game to unlock them. Here are the step by step details to unlock all costumes…

How To Unlock Costumes In Single Player

On your first playthrough, as you finish the game, you will unlock 7 new costumes for Kratos to wear in Single Player.

The new Kratos costumes are:

How To Unlock Costumes In Multiplayer

#2-5. Pre-order either God of War: Ascension’s standard or Collector’s Edition, at any store, to get the Mythological Heroes Pack. In Multiplayer this gives you access to history’s most heroic Spartan, and includes four unique armor sets for four of ancient Greece’s greatest mythological heroes: Achilles, Perseus, Orion and Odysseus.

The new character costumes are:

*These Multiplayer characters will likely become available worldwide as Paid DLC after launch.

Big thanks to Zeokens & Daemeon for the tips to find the alternative costumes!

Do you know of any more costumes in God of War Ascension? If so, please leave a comment with a the tip for how to get it. We’ll update this costumes page and give you credit for the discovery!