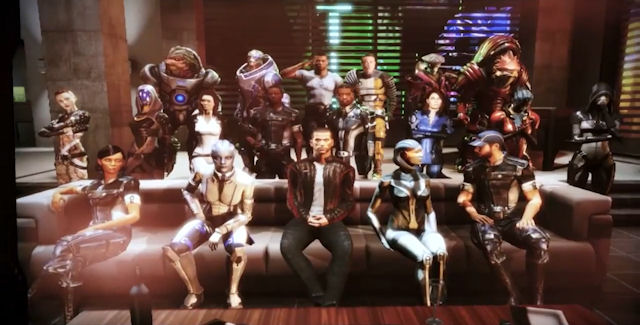 This Mass Effect 3 Citadel walkthrough will guide you through the beginning to ending moments of gameplay with strategy tips for this Action-RPG DLC on the PC, Xbox 360, PS3 & Wii U.

Please note that viewers must be at least 15-18 to watch, so no harm comes to those with innocent eyes. This game includes Blood, Partial Nudity, Sexual Content, Strong Language, Violence.

Embark on one last adventure with your team in Mass Effect 3: Citadel.

“The team has poured heart and soul into Mass Effect 3: Reckoning and Mass Effect 3: Citadel. As the launch of these chapters near, the feeling around the studio is bittersweet,” said Casey Hudson, Executive Producer of the Mass Effect series. “We have always been humbled and driven by the passion of our fans for the Mass Effect trilogy. We hope fans will enjoy spending more time with some of their favorite characters, we have certainly enjoyed spending time creating them. We’re excited to release this final sendoff for the trilogy and move forward into the future of the Mass Effect universe.”

How To Start The Citadel DLC

This video guide explains how to access the Citadel DLC in-game.

Part 1: Intro & Tour of the Apartment

In Mass Effect 3: Citadel, players will explore and discover new locations across the vast, deep-space station while also having the opportunity to reconnect with some of their favorite characters from all three of the Mass Effect games.

In this video walkthrough you’ll be accompanied by GamerMD’s voice-over commentary. Here’s the game introduction and a tour of Shepard’s new apartment.

Part 2: Attack of the Mercs with Dangerous Flying Candy

When a sinister conspiracy targets Commander Shepard, you and your team must uncover the truth, through battles and intrigue that range from the glamour of the Citadel’s Wards to the top-secret Council Archives.

Tip: Delay detection by hiding and then use the suppressed pistol to stop mercs from calling for backup.

Next, we must uncover the truth behind the plot against Shepard and fight alongside your squad – as well as the cast from the original Mass Effect and Mass Effect 2, including Urdnot Wrex!

Shepard and company must go undercover at a High Society party to follow a lead.

Time to storm the enemy stronghold with your crew and find out who the Mystery Man behind the plot against Shepard really is!