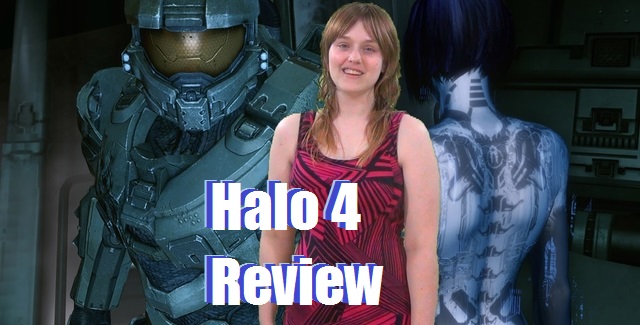 Thanks for stopping by for my review of Halo 4. In this video review I will discuss my impression of the story, gameplay, aesthetics, and audio of Halo 4. I will also reveal what I consider to be the best and worst aspects of the game. Finally, I will give my recommendation of who I think would enjoy this game.

Halo 4 has its little sci-fi setting to wrap a reason around why we need to kick alien butt. It’s there and I’ll get to it in a minute, but all you really need to know is Cortana is sick. She’s dying and Master Chief will stop it nothing to make her better. Nothing stands in between a surgically enhanced super soldier and his artificial intelligence girlfriend. Four years after the events of Halo 3, Master Chief had been considered dead or MIA by Covenant and UNSC forces. Cortana has been watching over the Master Chief in stasis until Covenant forces try to board their ship. They eventually crash-land on the surface of Requiem, a mysterious Forerunner planet, where most of the game takes place. It turns out this beautiful jungle planet is actually a prison. The Didact, the main baddie of the game, intends to revive the Forerunner Empire and wipe out any humans who get in the way. Unfortunately for The Didact, he mistakenly believes humans are weak. I think Master Chief and Cortana might know a little something about human strength.

Halo 4’s gameplay is very carefully crafted to feel familiar to any fan of the series and also is simple enough to pick up and understand right away. Everything feels smooth and easy to handle, from Master Chief, to the weapons, and especially the vehicles. As usual, Halo 4’s campaign can be played alone or co-op split screen, and up to three other players through Xbox Live. Spartan Ops, a new story-driven episodic game mode, serves as a replacement for the Firefight game mode that featured in Halo: Reach and ODST. The story for Spartan Ops is set six months after the events of the Halo 4 campaign. The Forge, a map-editing tool that was first featured in Halo 3 is also included. Finally, the Infinity multiplayer

Halo 4 is stunningly gorgeous, especially when it comes to the Forerunner planet, Requiem. This goes to show that the current gen consoles have really had used to their full potential before the next generation comes out. The parts of the game that are dark are often saturated and feature one color prominently. The bright middle of the game the colors are more subdued but the environment is vibrant and full of lush and interesting jungle. Each campaign chapter each work like Acts in a play, with a cohesive story put together in the end. Much effort, on the part of 343 developers, was put into avoiding a strict linear level design. When I picked a direction to walk in, I didn’t do it because there was a wall, or a cliff, or an insurmountable bush of uberness. It felt natural to take the path planned out for me, even in moments of intense action.

All throughout the game, and from the very beginning, Halo 4 reminded me of several of my favorite Sci-Fi flicks and shows. The opening theme song for the game immediately reminded me of Battlestar Galactica’s theme song. I love vocal songs so I

My favorite aspect of the game is the complex relationship between a brutally honest dying Cortana and a Master Chief slowly losing his grip on his military stoicism as he realizes he may lose his only “human” connection. I think it is fair to say Halo 4 is as much love story as a first person shooter.

The worst aspect of this game is how short the campaign is. I’m sure this is in an effort to keep gamers fresh for the episodic Spartan Ops but the campaign felt a bit easy, even on Legendary mode.

Halo 4 has a massive amount of replayability through the online multiplayer, Spartan Ops, and maps edited with Forge. The short campaign can even be tweaked by turning on skulls in the campaign menu which act as gameplay modifiers to increase the difficulty and add more challenge. The Halo 4 multiplayer can add countless hours of gameplay time. The incentive is to build up a customized Spartan, including gender and appearance. Weapons and armor are unlocked by gaining experience by playing the Spartan Ops co-op levels, or any of the competitive modes.

343 Industries succeeded, in my opinion, in making a game that fits in seamlessly with the series. Still, they managed to also renew the series and set a new standard. The depth of the interpersonal relationship between Cortana and Master Chief was just as fleshed out as the interesting new enemy, the Prometheans. I appreciated that, I need more depth in my video games.

There are so many people who love the Halo series, core and casual gamers alike; I know not everybody will feel the way I do about Halo 4. I have been playing Halo games for close to a decade now and I was very pleased to see that 343 Industries rose to the challenge and filled Bungie’s shoes. They provided a beautiful game that fits in well with the series and I believe most Halo fans will have a great time playing it.

So, do you plan to pick up Halo 4? If you already own Halo 4, let me know your impression of it down in the comments below.