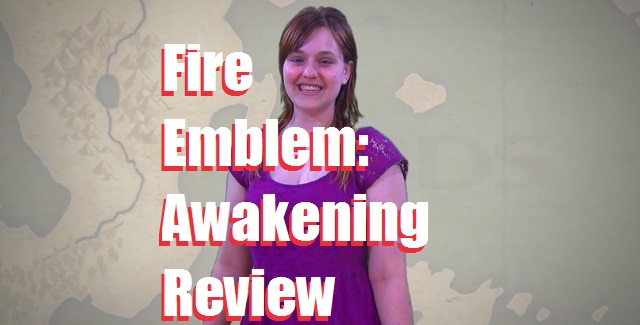 Thanks for stopping by for my Fire Emblem: Awakening review. In this video review I will discuss my impression of the story, gameplay, aesthetics, and audio of Fire Emblem: Awakening. I will also reveal what I consider to be the best and worst aspects of the game. Finally, I will give my recommendation of who I think would enjoy this game.

In my life-long gaming experience I have spent a lot of time accepting the fact that my specific tastes are not catered to very often by the industry. As the gaming market becomes ever more global, my un-Western-like palate is sated by Japanese developers. Anime tropey goodness? Check. Shipping galore? Check. Medieval European Fantasy setting imbued with Japanese lore? Double check. Fire Emblem: Awakening has it all. The story focuses on the Kingdom of Ylisse during a period of unrest. From here Awakening follows the color-by-numbers formula for a JRPG tactics game: There’s a Warrior Prince who must defend his Kingdom from a Rasputin-esque Evil Sorcerer King. The story is a bit open-ended and generic, but that is forgivable as it accommodates for all of the possible outcomes from the decision the player makes. The first choice the player makes is customizing a character; even selecting gender can radically change the story of the game and the relationships the amnesiac protagonist develops with the other characters. This is why I always try both genders when there is an option, as it can make a game’s story feel completely new.

Awakening is a fine example of the kind of gameplay affecting the story that I like to see. During a battle, Paring Up two characters, and even battling alongside each other will improve the relationship between those characters. Teammates get closer to each other as they fight and that closeness leads to improved stats when Paired Up. So, putting time, thought, and logic into pairing can change the course of the war. I didn’t do that, no, I shipped characters based on how adorable they are together. This game makes the player a God of Shipping; I had love triangles going, bromances, and falling-outs – all kinds of drama. Sometimes I didn’t even know who was going to end up together! Behind the tropes, ships, and fluff there is actually a satisfying tactics game. The gameplay does follow traditional tactics role playing games with turn based battles on a grid map. Each character and enemy class has strengths, weaknesses, weapons, and range of movement on the map. I learned early on that Pairing Up can be a useful strategy for protecting weaker characters and moving slow characters around the map.

Keeping with the theme, characters are designed around the trope they are cast in, but I think this is to play up the overarching theme of “don’t judge a book by its cover”. At first, characters seem like an open book based on their appearance and attitude but developing relationships reveal the hidden aspects of their personalities. Something worth mentioning are the cut-scenes, they are beautifully animated but short enough to not interrupt the flow of the game or pile on irrelevant lore, instead the story stays focused on the human drama between the characters.

Fire Emblem: Awakening’s soundtrack fits well with and enhances the fantasy adventure environment and story of the game. The voice acting talent in the cut-scenes is actually really good but underused. Much of the story is told through dialog shared between characters but I would have liked to see some of these scenes acted out and the voice acting talent utilized more fully.

My favorite part of Awakening is the ease of grinding. I have an almost obsessive need to build up my characters and make them unnecessarily powerful. With some tweaking of options and using Auto-battle, revisiting earlier chapter battles can very quickly catch up later-recruited characters or build weapon experience for a character who’s class has changed.

The worst aspect of this game is the missed opportunity to take a chance and diverge from traditional JRPG and anime tropes. Even though I enjoy those tropes, I never stop hoping that Japanese RPG writers will surprise me or make me think about something differently. I won’t say the development team played it safe, but they certainly haven’t raised any eyebrows. In the end, this is a very minor complaint on my part.

Fire Emblem: Awakening’s campaign can be played at several difficulty settings. After pairing two characters together, their children from the future will appear in Paralogues, adding hours of playtime to the game. The Bonus Box can summon a Bonus Team made up of legendary heroes from previous Fire Emblem games. In the Outrealm Gate, downloadable content is available with unique maps, some storyline dialogue, and a recruitable character. For a social attribute, the Double Duel allows two players to team up against the computer.

I have harped a bit on the lack of creativity in this game, and its reliance on tried and true tropes and stereotypes. I want to stress this does not feel like the developers are playing it safe, instead it feels like a tribute to fans of the genre. For those of us who love the fluff, we can accept a little generalization.

I recommend this game to any fans of the Fire Emblem series and tactics games in general, although you might find it a little boring if you are not interested in developing the character’s relationships as it is a vital part of the gameplay. Fans of dating sims and anime with romance and friendship themes will probably love the interaction and character growth in Fire Emblem: Awakening. If you can’t stand the fluff and are looking for a hardcore game that will test your very sanity with the need for logical tactics, this game might not be your perfect match but would make for a relaxing diversion. Tactics games, in general, make great introductory games for non-gamers and casual gamers because they can fit into any schedule and lack the urgency of other genres.