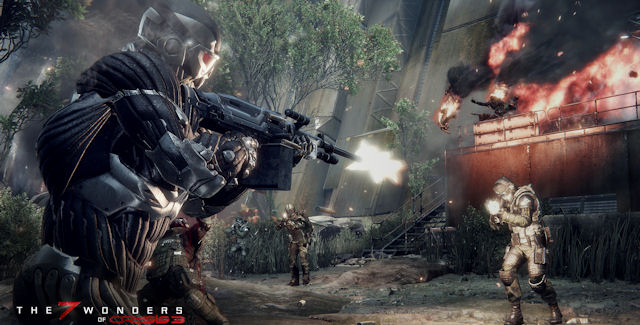 The Crysis 3 achievements guide lists every achievement for this Xbox 360 & PC First-Person Shooter game and tells you how to get and unlock them.

There are 50 Achievements (0 Secret) with a total of 1,000 Gamerscore points to earn in the Xbox 360 and PC versions.

3. A Flawless Getaway (15G) — Complete Welcome to the Jungle

8. The True Measure of a Hero (20G) — Complete Gods and Monsters

10. Halfway to Hell (25G) — Complete 3 of 7 levels on Supersoldier difficulty

11. World Saver (35G) — Finish the campaign in any difficulty

12. Bring it On (45G) — Complete the campaign on Veteran difficulty

22. Taste Of Your Own Medicine (15G) — Single Player: Kill 25 enemies while supercharged

Location: This can be done in the beginning of Mission 2: Welcome to the Jungle.
When going outside you can see a deer. Equip your explosive arrows and shoot the deer. Activate the cloak ability so that it doesn’t run away.

Location: Mission 2: Welcome to the Jungle.
At the end of mission 2 you will leave a building and enter an area with very tall gras and Ceph Stalkers. Your Nanosuit will be jammed and you get the secondary objective to disable the jammer. The objetive won’t be displayed on your HUD though. The jammer is just a little machine, located in the south-eastern corner of the area. Ignore the Ceph Stalkers and run straight to the jammer. Hit the jammer switch and it will turn off. You can also see a small world map with all objectives in the pause menu.

Location: Mission 1: Post-Human
At some point during Mission 1 you will come to a small room with a big tv screen and your comrade will open the next door. You will now come to an outside area with lots of enemies. The enemies have to spot you here! They will then call for backup and a helicopter will come in. Hold down the select-button to equip explosive arrows and shoot the helicopter two times. Once it explodes, the achievement will pop.

Location: Mission 3: The Root of All Evil.
Towards the end of the third mission you will go down a river. When the blue marker on the screen says that you are 190 meters away from your next main objective, look for a donut shaped object in the water. It’s shortly after you encounter a bunch of Cell Operatives. You can only go in one direction, so it’s basically impossible to miss. Press the X button on your Xbox 360 controller and jump on the donut to start surfing. There are two small obstacles along the way. One time you need to crouch and one time you need to jump.
Note: If you fall down, go back to the main menu and restart from the last checkpoint.

Location: Mission 5: Red Star Rising.
During the fifth mission you can drive a buggy. You have to run over 5 cell soldiers. At some point during the mission you will go down some stairs and a cutscene begins to play. After the cutscene you are on a mountain. Jump down and a buggy will be right in front of you. There are 4 soldiers in the first area. They are on some sort of metal structure that looks like a ship wreck. Do not kill them with the buggy rockets! Run over all four of them and continue to the next area. Keep driving until you come to a closed gate. There are some more soldiers hiding behind containers to the right of the gate. You must run over 5 soldiers in one playthrough! You cannot farm the kills by restarting checkpoints or replaying the mission.

Location: Mission 6: Only Human.
There are a total of 3 Pingers in the sixth mission “Only Human”. All of them can be found on the way to Defense Battery Bravo (main objective, cannot be missed). Pingers are basically tanks on legs. There are lots of explosives in the weapon caches of this area. Use the rocket launchers and C4 explosives. Your predator bow will also come in handy. The explosive arrows and electric arrows are very effective. If you are having trouble switch to recruit difficulty.

Location: Mission 7: Gods and Monsters.
This can be done in the last mission. Before starting the final boss fight you have to supercharge your nanosuit by stepping into alien generators. This is a main objective and cannot be missed. After using the second generator you should go for the 10 kills. Use the visor to locate enemies while making your way to the next main objective. While being supercharged you cannot take any damage and alien weapons have infinite ammo. The supercharge runs out after some time, so you need to hurry up.

32. Arrow to the Knee! (20G) — “Single Player: End an enemy’s career as a CELL operative by wounding him in the knee with an arrow!

Location: You will automatically get the Predator Bow in Mission 1: Post-Human, which is where you can first do this.
Hold down the select-button and set the draw weight to “low”. Choose the Carbon Arrows. This will ensure that you do the least possible damage per shot. Now look for a human enemy and shoot their knee. Tap the RT button on your Xbox 360 controller for just a short moment. If you hold down the button for too long you might kill the Cell Operative in one shot.
Important Note: The Cell Operative has to survive this incident.

Location: Mission 1: Post-Human.
One way to cause environmental kills is to shoot explosive barrels. During mission 1 there will be lots of opportunities to score double kills using this tactic. A great spot is in the outside area where the attack helicopter comes in as enemy backup, shortly after obtaining the predator bow. The last two Cell Operatives will be sitting behind a barricade. There are two explosive barrels right next to them. Shoot the barrels for an easy environmental double kill.

Location: Mission 2: Welcome to the Jungle.
You will encounter Ceph Stalkers for the first time in Mission 2. Just a few minutes after entering the underground area, you will enter a room with tall grass and a cutscene will begin to play. Go down the stairs and stay away from the grass. Activate the cloak ability and stand still until a Ceph Stalker is close to you. Sneak up from behind and hit the RS button on your Xbox 360 controller to perform the stealth kill. Move quietly so that the stalker doesn’t hear you.

39. Block Party (20G) — Complete a match in every location in New York (Public Match only)

40. Odd Job (25G) — Get two kills with one throw-able object in the same match (Public Match only)

42. The Specialist (30G) — Get a stealth kill, a rip and throw kill and an air stomp kill in the same match (Public Match only)

44. Going Commando (30G) — Get a primary weapon, secondary weapon and explosive kill in one life (Public Match only)

45. Hit me baby one more time (15G) — Melee someone with a ripped off shield in Spears (Public Match only)

46. Rudely Interrupted (20G) — Rip an enemy player out of a Pinger (Public Match only)

Please comment if you have any Crysis 3 achievement unlock tips of your own. Kudos will be given. – Thanks for visiting!