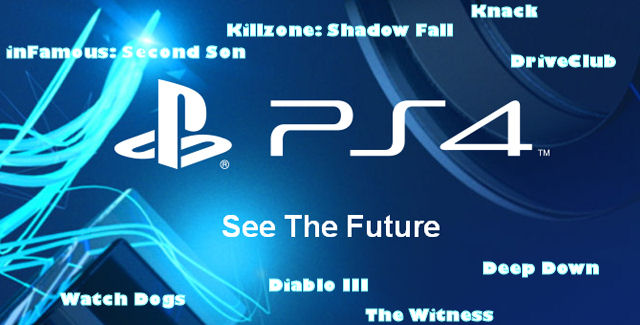 Sony will launch the PlayStation 4 in “Holiday 2013”. Since a new console is only as good as the games that carry it, here’s the confirmed PS4 launch games list! Out of the 8 expected PS4 launch titles, so far only 3 have been confirmed for day 1 release in 2013.

I just loooooove making lists, so I’ll update as more games get confirmed closer to launch.

#1. Killzone: Shadow Fall: Thirty years after the events of Killzone 3, step into the shoes of an elite Shadow Marshal and maintain order in a new world where the Helghast and the Vektans live side by side in a futuristic city, divided by a vast wall. You’re charged with keeping tensions between the Helghast and Vektans from boiling over. – I’m sure there will be no problems and this game will be VERY peaceful! 😉

#2. DriveClub: Social connectivity, cutting-edge graphics and the world’s greatest supercars feature in the latest title from Evolution Studios. DriveClub is a next generation racer where you can start a club and challenge the world.

#3. Watch Dogs: Learn what it is to have complete control over a hyper-connected city. Play as Aiden Pearce, a brilliant hacker and former thug, who uses the city of Chicago as the ultimate weapon to exact revenge on those who hurt his family. – I watch the Person of Interest TV show every week, so this is right up my alley!

LAUNCH TITLE STATUS: CONFIRMED — Following the announcement of the PlayStation 4, Ubisoft revealed that its highly anticipated open world action-adventure game, Watch Dogs, will be available for the launch of the new system.

#4. Diablo III: Blizzard’s return to console development was announced at the PlayStation 4 announcement event with a lot of fanfare. The PS3/PS4 version of Diablo III will be based on the critically acclaimed core experience of the PC version, including all of the latest upgrades, such as the Paragon leveling system, customizable Monster Power, Brawling, and epic Legendary items. It also adds local co-op modes.

LAUNCH TITLE STATUS: UNCONFIRMED — The action-RPG series is launching on both PS4 and PS3 at the same time. Since it’s already playable, this is looking like a late 2013 release. PS3 version is coming on September 3rd, so let’s hope Blizzard can get it up and running on PS4 by November 2014.

#5. The Witness: The latest puzzle game from Jonathan Blow, creator of Braid. Explore an abandoned island and solve the puzzles you find there. What is this mysterious place, what happened here in the past and what is happening now?

#6. Knack: Turn into a gigantic fighting machine thanks to the power of ancient relics in this new adventure platforming game. Mankind enlists the help of an unlikely hero named Knack to protect them from a dangerous new threat in this fun-filled and action-packed adventure set in a unique and vibrant world.

LAUNCH TITLE STATUS: CONFIRMED — This is Sony’s flagship ‘Second Screen Experience’ title with the PS4 able to stream this game to your PS Vita’s screen for mobile play. So although unconfirmed it’s very likely Sony will want to release this game at launch.

#7. inFamous: Second Son: Seattle is the setting and Delsin Rowe is the new hero with the ability to manipulate smoke. Surrounded by a society that fears superhumans, Delsin Rowe is forced to run from the oppressive Department of Unified Protection. The choices he makes along the way change the future of everyone around him.

LAUNCH TITLE STATUS: UNCONFIRMED — The inFamous spin-off is set for a “launch period” release, indicating it may not make it to launch and possibly won’t be out until early 2014.

#8. Deep Down (working title): Capcom’s brand new IP is still shrouded in mystery, is it Monster Hunter meets Dark Souls? Only time will tell. Known only under its working title of “Deep Down”, the dragon-fighting knight in the teaser shows off a brand new game engine codenamed “Panta Rhei.”

• Destiny: A brand new first person shooter from Bungie Studios. Explore the ancient ruins of our solar system, from the red dunes of Mars to the lush jungles of Venus. Defeat Earth’s enemies. Discover all that we have lost. Become legend.

RELEASE NOTE: Publisher Activion confirmed we should not expect Destiny in 2013, but early 2014 instead. Whenever it arrives, it’s coming to both PS3 and PS4 at the same time.

RELEASE NOTE: Expect it by 2023! Although the 2023 release date is a half-joke, it’s not really funny how long Square Enix takes to release Final Fantasy games these days, so it is most definitely not coming for a few years. This way it might be a pleasant 2014-2015 surprise if you’re not waiting for it. Note that Square Enix says it’s a 2014 game.

• Rocketbirds 2: Evolution: Like its PlayStation predecessors, the game will set you on the path to annihilate an evil penguin regime in a cinematic platform adventure game featuring full solo and co-op campaigns with stereoscopic 3D support.

RELEASE NOTE: Ratloop’s puzzling adventure series continues on PS4 as a downloadable game. No release date was given.

• Cyberpunk 2077: The creators promise that “Cyberpunk 2077” will be true to the essence of the cyberpunk genre, well known from the famous pen-and-paper game, “Cyberpunk 2020”. Players will be thrown into the dark future of the year 2077 and into a world where advanced technologies have become both the salvation and the curse of humanity. A multi-thread, nonlinear story designed for mature players.

RELEASE NOTE: CD Projekt RED’s action-RPG is “coming when it’s ready”, so don’t expect it until at least 2015.

Which of the PS4 launch games on the list do you want to play most?