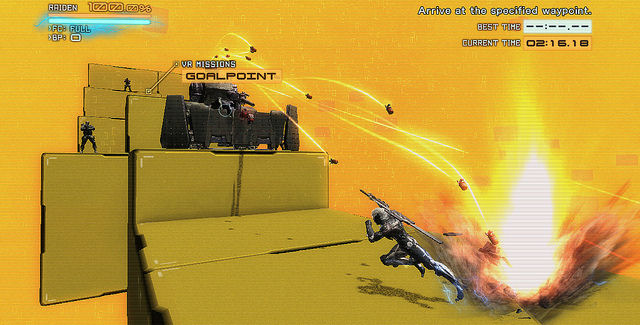 Using the classic Konami Code AKA Contra Code you can unlock a brand new harder difficulty level to be available in the game, titled “Revengeance Mode”. It also unlocks the other difficulty mode, titled “Very Hard Mode”.

How To Get Infinite Ammo

To get the Infinite Ammo upgrade from the Doktor, you’ll need to have sliced off enough left hands off soldiers throughout the game. Once done, you can buy the upgrade for 50,000 points.

Once equipped in the “Customize” menu, the Infinite Wig is jokingly described as “A brown artificial hairpiece designed for cyborg use, but suitable for anyone suffering from hair loss.” But it’s real purpose is to grant infinite ammunition for all sub-weapons.

There’s a glitch in the system! At any point in the game you can farm infinite BP — the game’s currency — to buy all the weapons in the game and leveling them up to the max.

How it’s done: Go to chapter “File R-01: Coup D’etat” and head over to the ferris wheel, then turn left, run forward and jump up the concrete building to find a BP chest on the roof. Next you’ll exit the chapter by pressing the Select/Back button on your controller, select Courtney and save the game. After that press the Start button to “Restart Checkpoint” and Raiden will be placed back into the level right in front of the same ferris wheel near the BP chest that you can now open anew! Repeat this method until you have enough BP.

Metal Gear Rising: Revengeance has PlayStation 3-exclusive DLC VR Missions! On top of the VR Missions already in the Xbox 360 & PS3 versions, the PS3 versions gets 30 all-new missions to the game! These missions feature that classic VR (Virtual Reality) look inspired by the original Metal Gear Solid: VR Missions. The DLC pack download code you get with the game promises to give you pure, uncut gameplay that pushes Raiden’s Cyborg body to its limits.

Description of what you can do in the VR Missions, including playing as a Dwarf Gekko:

“Featuring a mix of combat training, tactical maneuvering, stealth-based approaches and more, these missions will both provide practice in which to hone your skills in original stages not seen the in the game’s campaign, and feature an eclectic mix of challenges that any veteran of METAL GEAR SOLID 2: Substance or METAL GEAR SOLID: VR Missions would come to expect. And, in an interesting twist, you’ll be able to take control of the much loved/hated Dwarf Gekko in the VR Missions.”

Note: These are PS3-exclusive in North America, but are said to be released at a later date in other regions. Here’s what a VR Mission looks like in MGR:R.

There are various Armor Suits available for Metal Gear Rising: Revengeance as pre-order bonuses, paid DLC or in Limited Editions. Here’s an overview of them all.

Description: ” ‘I am lightning, the rain transformed…’ Take on the identity of Raiden from Metal Gear Solid 4: Guns of the Patriots with this DLC for Xbox 360 and PS3.”

Description: “Shift the tide of warfare as cyborg ninja, Raiden, with exclusive in-game white armor skin. In addition to the white armor exoskeleton visual upgrade, players will receive an increased maximum amount of life-recovery items to keep the battle raging.”

Description: “Fire up Raiden with the Inferno armor skin, exclusive to Amazon. In addition to the dynamic red armor exoskeleton visual upgrade, players will receive an increase in the maximum amount of throwing weapons such as grenades within his arsenal.”

• Commando Armor — The Commando Armor is available as paid DLC in North America. In Europe it’s included with every pre-order from independent stores.

Description: “Custom Body for “Raiden” in “Metal Gear Rising: Revengeance”. Green armor design is used to mimic military fatigues and includes increase in the amount of range weapons you can carry.” – It’s shown at the end of the next trailer.

Do you know of any Metal Gear Rising Revengeance cheats or unlockables?
Let us know in the comments, you’ll get credit for finding out. – Thanks for visiting!