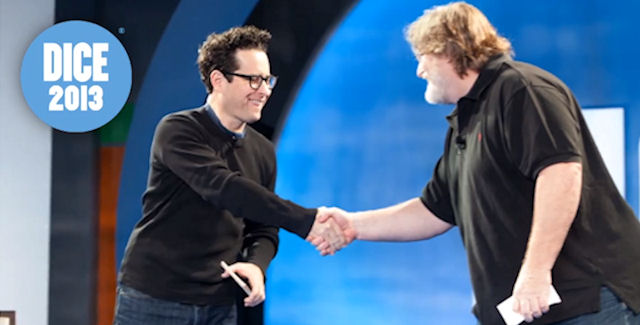 Valve founder Gabe Newell (of Half-Life & Portal series fame) did the opening keynote and a “Storytelling Across Platforms: Who Benefits Most, The Audience or the Player?” talk for the D.I.C.E. SUMMIT 2013. At the latter event Bad Robot TV show/movie director J.J. Abrams (of Star Trek reboot & future Star Wars: Episode VII fame) came on stage and they announced a Half-Life Movie or Portal Movie is in serious talks! 😀

Here are quotes from what they said on stage:

Newell said: “We reached the point that we decided to do more than talk” after they had “a series of conversations.”

Abrams said: “There’s an idea for a game that we’d really like to work with Valve on. We’re super excited about that and we also want to talk about making movies, either a Portal movie or a Half-Life movie.” Which is because “I love the experience of playing your games”, especially in Portal where he feels “there’s this incredible mystery pulling you forward.”

“Plans for a Portal or Half-Life movie are as real as anything in Hollywood ever gets… which is that we are really talking to Valve, we are going to be bringing on a writer, we have a lot of very interesting ideas.” -J.J. Abrams

After the event Abrams added: “Plans for a Portal or Half-Life movie are as real as anything in Hollywood ever gets… which is that we are really talking to Valve, we are going to be bringing on a writer, we have a lot of very interesting ideas.”

But it gets better! While initial plans call for a choice between a Half-Life or Portal movie, it seems Abrams wants to make films in both universes!

To quote Abrams: “Our goal here to is to treat the world Valve has created in both these properties like anyone would a book or some great story that comes from a pitch or original script — just to treat it with the respect they treat their games and their players with.”

“We’re not looking to make a movie in the gaming world, we’re not looking to impose what we do on that, we’re looking forward to taking some of our strengths and collaborating with some of these incredible minds that make some of my favorite games,” he told the Verge.

Update: Here’s the full DICE presentation with the two of them:

Here’s what a fan-made live-action Half-Life Movie looks like:

Here’s what a fan-made live-action Portal Movie looks like:

If given the choice would you watch a Half-Life Movie or Portal Movie?