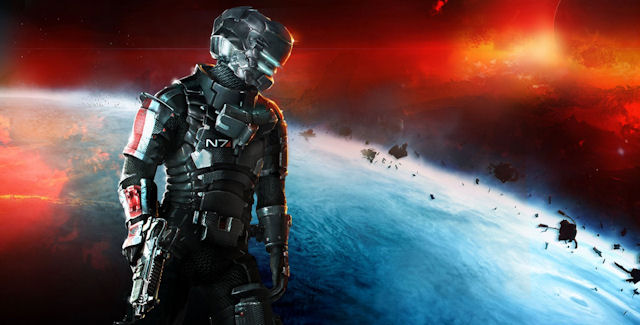 Play Dead Space 3 in a different way from the normal campaign. Complete the game on any difficulty level to unlock these 4 additional difficulty modes.

• New Game+ — This game mode is locked until you complete the game once. Your inventory and weapons will carry forward, although your chapter progress will be reset.

• Classic Mode — This game mode is in the spirit of the original Dead Space. The campaign is now a singleplayer-only affair, without cross-hairs, and without any resource management elements.
Unlockable The Devil’s Hand weapon: Complete your New Game+ second (or later) playthrough on Classic Mode and your reward will be the powerful The Devil’s Hand weapon. This big red foam finger was also in Dead Space 2, it’s also called The Devil’s Horns or the Pew Pew gun! 😀

• Pure Survival Mode — This game mode emphasizes resource management. Everything in the game has to be crafted, because enemies only drop resources and there’s no ammo, health or weapon parts to be found during the entire campaign.

• Hardcore Mode — This game mode provides a challenge beyond even the Hard and Impossible modes. During the entire campaign you only have 1 life and may only save 3 times. But upon completion your reward will be an immensely powerful weapon.
Easy Hardcore Mode Cheat: To cheat the system, after the game has auto-saved you can copy your Hardcore harddrive save to USB. Then in case you do, you can delete the harddrive save and replace it with the USB backed up save where you’re still alive and resume playing without being reset to the start of the game!

• Retro Mode — This game mode add a graphical filter to the game to make it look like a pixelated full-motion video adventure game from the 1990’s.
Note: Retro Mode doesn’t unlock after you complete the game for the first time on any difficulty level, you have to finished the game on the Hardcore difficulty level.

• The Plasma Cutter can shoot really fast once you have +3 circuits installed to increase rate of fire, damage, etc.

• The Devil Horns are used as a primary weapon because they are super strong. They are unlocked by beating the game in Classic Mode. The settings for Classic Mode are: Hard Difficulty Mode, Classic Aim, and Weapons Only.
To check if Classic Mode is turned on, pause your game to open the main menu. There, select Settings, and then go to Game Settings.

• N7 Armor Suit — To get the N7 armor, you simply need to have played Mass Effect 3 and have a save file from it on the same system you’re playing Dead Space 3 on. Then play the full game of Dead Space 3, and equip Commander Shepard’s N7 armor in-game for Isaac Clarke & John Carver to wear.

• Flight Suit — To get the Flight Suit, you have to collect all 40 Artifacts in the game.

• Circuit Sets — To get the Circuit Sets (one for each artifact category), you have to collect all 40 Artifacts in the game.

• Witness Suit — Included with the Limited Edition* version of the game, in the “Witness The Truth Pack”.
Description: These insulated suits were worn by S.C.A.F. deep dig teams assigned to exhume the darkest secrets of Tau Volantis. When they emerged weeks later, they were covered in strange graffiti and claimed to be “Witnesses to the Truth.”

• Evangelizer — Included with the Limited Edition* version of the game, in the “Witness The Truth Pack”.
Description: A modification of the standard firearm used by the Sovereign Colonies Legionaries, this version sports an advanced assault rifle on the top with a 2100 “Big Boy” tactical shotgun on the bottom.

• First Contact Suit — Included with the Limited Edition* version of the game, in the “First Contact Pack”.
Description: Built by S.C.A.F. for encounters with “foreign entities,” it sports a flamboyant gold finish to provide protection from long term space exposure.

• Negotiator — Included with the Limited Edition* version of the game, in the “First Contact Pack”.
Description: The overclocked, top-mounted Tesla Beam is capable of bursting a man-sized organism into several pieces with a single shot. The bottom-mounted Line Gun appears to have been built with the sole purpose of cleanly dismembering organic tissue from a distance.

• EG-900 SMG — Included with GameStop pre-orders of the game.
Description: This EarthGov-issued submachine gun is built for urban warfare. It’s compact but deadly, sporting an internal hyper-accelerator for maximum damage.

• Buy All Items — Microtransactions to upgrade your gear are also featured in the game’s weapon crafting system, allowing you to buy everything. The catch? You’ll have to spend real-world money to do it. But these are optional purchases to improve your arsenal.
If you don’t have enough in-game currency through your scavenger bots, the bench screen will tell you “Cannot craft. Additional researches required”. Then by selecting “Downloadable Content” you can buy them with your own money. This would be convenient to get the weapon parts that are normally only available to buy later in the game, unless you’re playing through it again on New Game+.

• The Devil’s Hand — Unlock this powerful joke weapon by completing the game in Classic Mode. Read in the “Unlockable Modes” section above how to get the required difficulty mode.

* Note about the Limited Edition extras. EA claims it’s only available until February 12, 2013.

Only on Xbox 360 using Kinect can you activate shortcuts via over 40 voice commands.

How to find the list of Kinect command in-game? Pause the game to access the Main Menu, select the Settings menu and then go to Kinect Commands. This lets you look at the Kinect commands list and use the Kinect Tuner.

Here’s the list! Use these shortcuts to navigate seamlessly through the interface menus and activate commonly used actions, including loading weapons, changing locations and healing and assisting your co-op partner.

During co-op play, you can use simple Kinect voice commands to “give partner ammo” or items. This is handy for actions that would normally take a couple of extra clicks on the sticks or button-presses on the keyboard to activate, now the result is immediate.

Here are some Kinect Shortcuts you can easily use in-game:

EA has confirmed if you get scared/angry and curse (like “f*ck!” or whatnot) that something will happen. They said “There are commands where you might be in a certain survival-horror situation and you might yell a specific expletive and it might behave in a way that you want it to.”

To infinitely respawn items you have to reload the game anytime you see “Save and Progress” text on the top-right of your screen. This saves you right next to places with item boxes and/or locker rooms, leaving the area open for you to farm for Health Packs and Metals.

Here’s a quick video tutorial to show you how to exploit the save system in Dead Space 3. It’s a handy cheat!

There are no more Dead Space 3 cheats on Xbox 360, PS3 & PC yet. So until they are discovered, we made the handy Dead Space 3 guides listed above to help you with tips and tricks for the game!

Do you know of any Dead Space 3 cheats or unlockables?
Let us know in the comments, you’ll get credit for finding out. – Thanks for visiting!