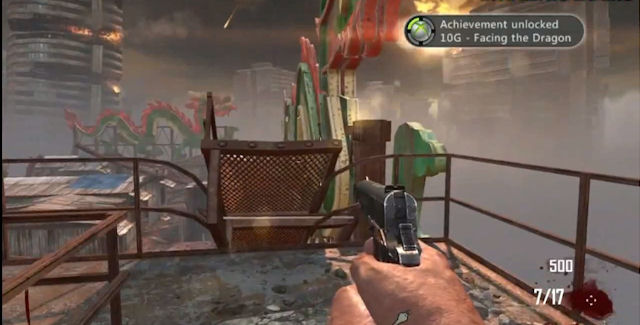 The Black Ops 2 Revolution achievements guide lists every achievement for this Xbox 360 DLC pack and tells you how to get and unlock them.

There are 10 Achievements (0 Secret) with a total of 250 Gamerscore points to earn in the Xbox 360 version, which is a timed exclusive for about one month before the PS3 & PC versions of this DLC get released.

1. High Maintenance (75G) — In Die Rise, be the architect of their instruction.

This video guide shows that you can get this achievement on your own as well.

5. Slippery When Undead (15G) — In Die Rise, kill 5 zombies with a single shot from the Sliquifier.

6. Facing the Dragon (10G) — In Die Rise, face the dragon head-on before reaching round 2.

Follow the video guide map directions to reach the dragon neon sign and face it head on.

This is what the new “Who’s Who?” Perk does in Die Rise, and the video guide also shows how you unlock the new “I’m my own best friend” achievement!

8. Polyarmory (30G) — In Diner Turned, get a kill with each primary weapon in a Public Match.

The primary weapons you each need to kill with are:

When you kill a few zombies in a row a monkey might drop, pick it up and kill another zombie with the monkey, a monkey with a white glow will appear, pick it up to unlock the achievement.

10. I See Live People (20G) — In Diner Turned, kill the human while its decoy is in play in a Public Match.

Please comment if you have any Black Ops 2 Revolution achievement/trophy unlock tips of your own. Kudos will be given. – Thanks for visiting!