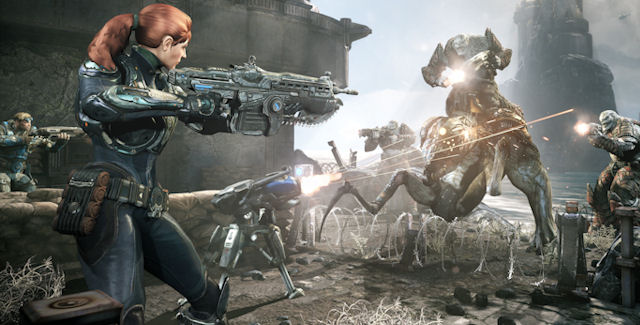 GameStop, Microsoft and Epic Games have announced the Gears of War Judgment beta release date is March 15th, 2013 in America exclusively for GameStop PowerUp Rewards members who preorder “Judgment” online or at any GameStop location nationwide. – The multiplayer beta / demo will be accessible to all Xbox LIVE Gold members worldwide once the game launches for Xbox 360 on March 19th, 2013.

Gears of War fans across America will be the first to join the fight against the Locust Horde early through the signature new multiplayer mode in “Gears of War: Judgment,” OverRun. The “early access” experience for PowerUp Rewards members who pre-order at GameStop will be available from Friday, March 15 at 11:59 p.m. PT to Monday, March 18 at 11:59 p.m. PT. This offer also applies retroactively to members who have previously pre-ordered the game at GameStop.

As an added bonus: Multiplayer experience points (XP) earned in the beta will carry over to the final game for players who purchase and play “Judgment” in the first week following its U.S. release, allowing them to get a jump on the competition and begin unlocking special rewards, like new weapon skins, medals and achievements.

OverRun is a thrilling new class-based competitive mode that pits Locust and COG soldiers in a head-to-head battle unlike anything “Gears” fans have experienced yet. An objective-oriented mode that lets five-player teams alternate between playing as Locusts and COG soldiers, OverRun marks the first time that a class-based, competitive multiplayer experience has been introduced in the “Gears of War” series.

Check out a video tutorial of the new OverRun mode that’s in the beta here:

On top of the “early access” experience, fans who preorder “Judgment” from GameStop will also receive two exclusive pre-order bonuses for use in competitive multiplayer modes:

* “Young Marcus” character skin – Decorated war hero Marcus Fenix is the legendary leader of Delta Squad, a small group of COG soldiers responsible for saving mankind from destruction at the hands of Locust and Lambent forces. This exclusive character skin takes Marcus back in time, six weeks after the end of the Pendulum Wars, and during the chaos of Emergence Day – a time before he was hardened by his long imprisonment.

* Lambent weapon skin – This exclusive weapon skin lets you show off your grub-slaying exploits and customize select weapons with the emulsion of your fallen Lambent foes.

* Additionally, everyone who preorders “Judgment” from any retailer worldwide will receive the Classic Hammerburst, a fearsome and effective weapon that served as the standard-issue assault rifle of the Locust Army.

Will you try out OverRun in the Gears of War Judgment Beta?