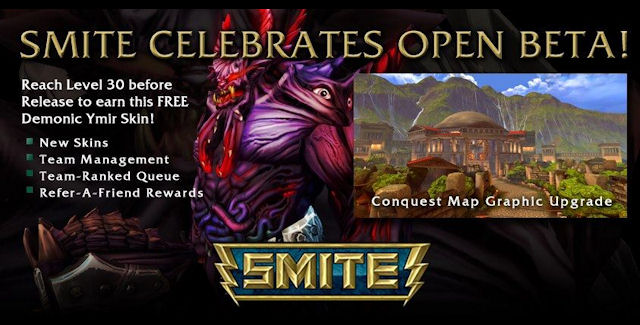 Game description: “SMITE will be a free-to-play online battleground between gods. Players choose between a selection of mythical gods, join session-based arena combat, and use custom powers and team tactics against other player-controlled gods and non-player controlled minions. With SMITE we draw inspiration from DoTA-style RTS titles, but leverage the Unreal Engine 3 to introduce original action oriented combat mechanics, great graphics, and a mythology themed setting.

SMITE is similar to DoTA gameplay but instead of being above the action you are IN the action. Close third-person camera instead of RTS view. Move with WASD instead of clicking on a map. Detailed graphics and visual effects. ACTION combat, dodging, and aiming. Everything is a skill-shot. Free-to-play but not pay-to-win.”

Watch the Smite Open Beta trailer that shows off the newly added features and content:

All player progress and unlocks up until now will be preserved through Open Beta and into Release with no planned character wipes.

Also, a Limited Edition cosmetic skin for the frost giant Ymir will be awarded to all players who reach Level 30 during the Beta period. That award will be granted upon Smite’s official release.

The following new Smite content and features are included in the Open Beta version:

“SMITE has been our fastest growing game to date, with over 900,000 players participating in Beta already. We’ve been giving out keys very liberally, but today we officially drop the key requirement in order to stress and stabilize our North American and European servers in preparation for release. We will continue to polish the game, release additional gods, and further refine the god and item balance over the coming weeks before a general release later this quarter.”

Smite is set for release sometime in 2013 for PC only.

Will you be trying out the Smite Beta?