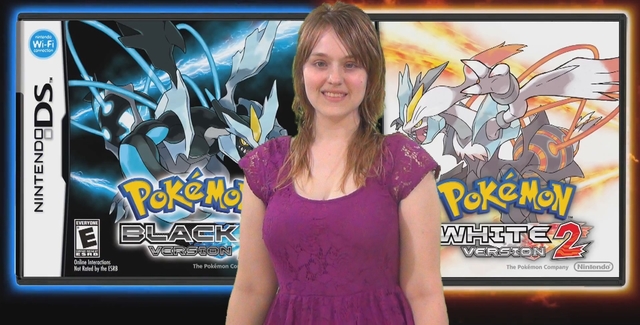 Thanks for stopping by for my review of Pokémon Black Version 2 and White Version 2. In this video review I will discuss my impression of the story, gameplay, aesthetics, and audio of Black/White 2. I will also reveal what I consider to be the best and worst aspects of the game. Finally, I will give my recommendation of who I think would enjoy this game.

Pokémon Black Version 2 and White Version 2, hereafter referred to as “Black/White 2”, are sequels to Pokémon Black and White, set two years after the previous games. Once again, both titles are independent of each other, but feature basically the same plot. While both can be played separately, trading Pokémon between both of the games is necessary in order to complete the games’ Pokedex. I chose Rosa as protagonist for White 2, and played with Nate in Black 2, with both Versions of the game starting with our young hero in Aspertia City. Their overly trusting parents allow scientists to give them a Pokémon and away we go! After meeting a rival, our hero sets off on a journey across the country, battling Gym Leaders to acquire eight Gym Badges, and then goes on to challenge the Elite Four of the Pokémon League and its champion.

Like most Pokémon games, Black/White 2 are RPGs with adventure elements, presented in a third-person, overhead perspective. If it ain’t broke, don’t fix it. I have been playing Pokémon games for over a decade and the charm and simplicity keeps me coming back for more. Black/White 2 continues the fine tradition of Pokémon games, with enough new content to keep even a seasoned player’s attention. New areas and locations feature several more Pokémon than the last Black/White games. A new game mechanic introduced in Black/White 2 is the PokeStar Studios, where the hero participates in Hollywood-like filming of a movie involving Pokémon and other actors. Another new mechanic is the Pokémon World Tournament, where the player battles powerful trainers from the previous games in the series.

The graphics are basically the same as the previous Black/White games. The cut-scenes and battles are nicely animated, the sprites of the Pokémon are fully animated and the camera changes position to highlight specific parts of a battle. Even these small animations make the battles feel a lot more engaging than the first Pokémon games I played.

Confession: I have never been a big fan of the Pokémon RPG songs that we’re meant to listen to on our adventure. I don’t dislike the usually upbeat and high-energy music, but I confess that I turn the volume down and listen to my own music or more embarrassingly sing the Pokémon cartoon theme song. I want to be the very best like no one ever was! Pokémon! Whatever, you know you know sing it too.

My favorite part of Pokémon Black/White 2 is the Pokestar Studios as it is similar to the Pokémon Musical from the first Black/White games — And lets the player star in adorably fun Pokémon themed short productions!

The worst aspect of the game is kind of a good thing so I’ll just put it out there. There are too many Pokémon to catch. I love that there is a huge selection of Pokémon but at the same time I am driven to catch them all. Pokémon! I swear to God I’ve been brainwashed by Nintendo at very young age to ‘catch them all’. And now they wave three hundred in my face as if to and say: “oh yeah? Try to catch them all now!” I really am torn because I love to see some of the Pokémon from every generation. But at 140 caught, I’ve come to realize I don’t think that I can catch them all and it kind of bothers me.

Black/White 2 builds off of the innovation of the first Black/White games. With the first games and they revamped the series and had a lot of new features including a large unique Pokedex and basing their region not on one of the Japanese islands but on New York City. Liking or disliking those changes will probably be up to personal preference and the differences between the first two games and the sequels don’t really bring anything new to the series.

Just in one play through of each the Black Version 2 and then White Version 2 provides countless hours of gameplay. The day to night and season cycle are back and encourage the player to revisit areas to experience each environment. And, of course, to try and catch them all. For a completionist, this is harder than ever between these two games.

I do recommend this game to those of you who enjoyed the first Pokémon Black/White games and I suggest that you pick up a copy of Pokémon Black/White 2. It stays true to the heart of any good Pokémon RPG, so that any avid fan or newcomer could pick up a copy of Black/White 2 and enjoy themselves. I think what make these games so great is they appeal to such a wide audience. A fair warning to completionists, there are a lot of Pokémon in these games. You might have to reconcile yourself to not catching them all before you even buy the game or you might end up tearing your hair out.

So, do you plan to pick up Pokémon Black 2 and White 2? If you already own Black/White 2, let me know your impression of it down in the comments below.