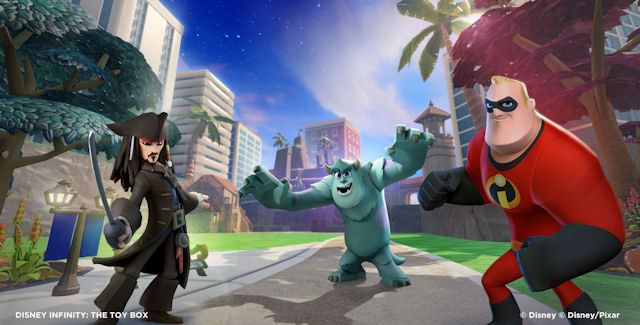 Disney Interactive today unveiled its most ambitious gaming initiative ever, Disney Infinity, which lucky for Skylanders game & figure fans is essentially Disney Skylanders! Since the game allows you to bring dozens of popular Disney & Pixar character figures into the game world. It’s coming to Wii, Wii U, Xbox 360, PlayStation 3 and Nintendo 3DS in June 2013.

Disney announced that this all new game platform unlocks the freedom to create stories and play experiences starring beloved characters from The Walt Disney Company and Pixar Animation Studios. Disney Infinity allows players to both experience original adventures in some of their favorite Disney and Pixar worlds and to build their own worlds using the power of their imagination.

Take a look at the first Disney Infinity trailer here:

Honest, I’m not really sure how it will end up working as a game yet, but the trailer does make it look like fun. There’s around 30 characters revealed in this first look alone!

Disney Infinity integrates collectible character figures that come to life in the game. These figures provide experiences that are true to these characters and stories, as well as the opportunity to bring characters from various Disney and Pixar films to play together in a virtual “Toy Box.” This all-new game universe will launch in June across all consoles and will have a phased roll out across mobile and online devices throughout 2013.

Throughout each story-driven experience, called a “Play Set,” players will solve challenging puzzles, battle enemies and explore iconic locations from famous Disney properties, while collecting unique characters, vehicles, and gadgets from each world and saving them to a virtual “Toy Box.” Players can access their “Toy Box” and build and customize their own unique virtual world using their favorite characters, vehicles, settings and accessories. Disney Infinity allows players the opportunity to share these unique creations in the “Toy Box” mode with friends both online and off.

• Disney Infinity Interactive Pieces – Initially a line of 40 collectible interactive pieces will be introduced that allow players to expand and customize their play experiences.

• Disney Infinity Interactive Character Figures – Seventeen character figures will allow players to experience a variety of their favorite characters in true to property experiences and in “Toy Box” mode.

• Disney Infinity Power Discs – Interactive discs can be placed on the Infinity base to power up characters and “Toy Box” with unique powers, customizations and gadgets.

Some quotes from the creators:

“Disney Infinity introduces a new way to interact with the best of Disney on one game platform, both now and in the future,” said John Pleasants, co-president, Disney Interactive. “With this innovative approach to gaming, Disney Infinity will bring to life new characters, stories and environments from The Walt Disney Company over time in a way that will delight fans and gamers alike.”

Development for Disney Infinity is being led by Disney Interactive and Avalanche Software.

Are you excited for Disney Infinity?