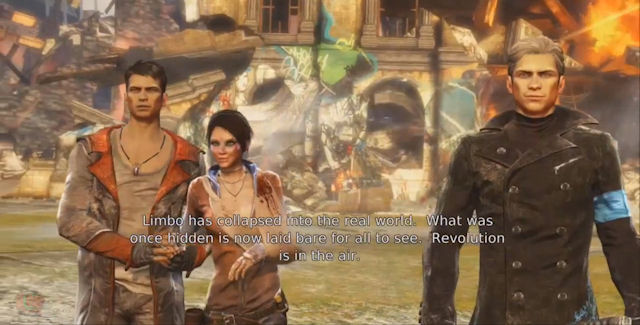 Capcom producer Alex Jones said at the Eurogamer Expo ’12 that Dante’s development throughout DmC: Devil May Cry may lead to a few questions from fans.

“For the story, I hope it’s a satisfying story that resolves itself and potentially leaves people wanting to find out more about this world and what could come next.” -Capcom Producer

To quote his answer if there will be a sequel, he said: “Yeah, the story is Dante kind of finding his purpose. He’s on the margins of society at the start and he’s just kind of surviving, and then Vergil finds him. At first, just by offering him an opportunity for revenge, Dante then at least has some sort of a goal. As he moves deeper into the story he becomes more connected with the larger struggle it’s about him finding his place in the world.

Yeah, hopefully ‘balletic awesome sh*t’ will be one of their few takeaways from the game. For the story, I hope it’s a satisfying story that resolves itself and potentially leaves people wanting to find out more about this world and what could come next. But yeah awesome balletic *ss-kicking was one of the main objectives.”

Capcom goes on to confirm they are very happy with their partnership with Ninja Theory and would like to continue working together going forward. Although, one would assume the financial success of DmC: Devil May Cry would first need to be confirmed, after the game’s been for sale for a few months in 2013. Reviews have been almost all very positive, so that bodes well DmC: Devil May Cry 2.

You can read more about what Capcom has to say in the VG247 interview.

The DmC: Devil May Cry ending chats between Dante and his brother Vergil explain their different opinions and establish Vergil as a possible antagonist — in a Nephilim family feud of sorts — as the half-Angel half-Demon brothers may fight for the human’s freedom (Dante’s side) or submission (under Vergil’s rule). Since their fight is left unfinished at Kat’s request, you can bet on it being continued in a possible sequel. You can watch their full discussion in the video below, if you’ve already finished the game or if you don’t mind story spoilers.

Here’s the full 12-minute ending sequence that starts at 2:22:00 into this video.

Because of what Vergil says at the end of the game, I’m tentatively giving DmC: Devil May Cry 2 the subtitle “Human Revolution”. Now that the humans are aware of Demons, they can finally fight back with Dante leading them (for example). Here’s what Vergil said: “Limbo has collapsed into the real world. What was once hidden is now laid bare for all to see. Revolution is in the air.”

I wonder if there are any other hints in the story aimed at providing backstory for a sequel? Perhaps Phineas and his ‘magic eye’ will return to help Dante unlock his full potential as he faces an all-new foe? Or maybe the brothers can put their differences behind them against a common enemy and finally free their father Sparda from endless torture!? I mean, that WOULD be the nice thing to do.

What are your suggestions for DmC: Devil May Cry 2?