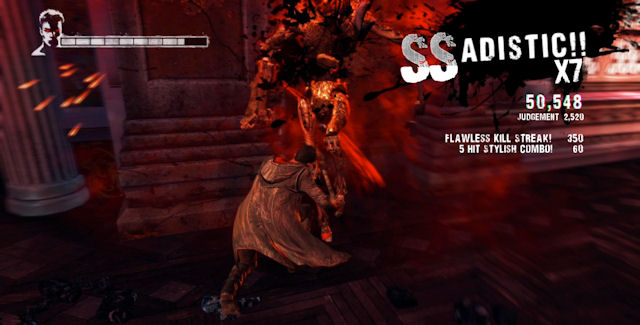 Take a look at the full DmC Devil May Cry move list that includes all special moves in DmC.

Tip: You can review all currently known combos by pausing the game and selecting “Move List”. Here’s the full move list…

Shown in text are the PS3 controls. — The controls are one to one conversion between the PS3 and Xbox 360.

To see both move sets for the officially listed moves, you can also look at the embedded images for each weapon. It shows all button press options for both consoles laid out in front of you. The text here lists the hidden special moves as well.

Here’s a gallery of all DmC weapon move lists: 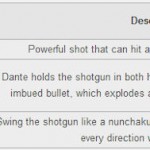 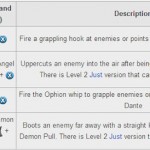 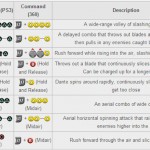 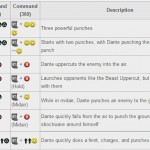 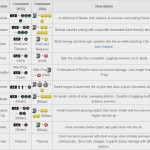 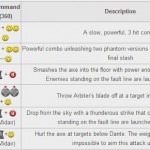 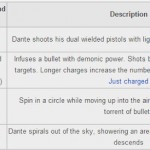 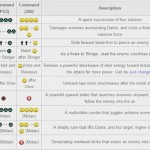 
Here’s an overview of all the weapons and their move sets.

Here’s an overview of all the moves not in the action list.

Use the human-class weapon called Rebellion by directly pressing the corresponding face buttons for different attacks. 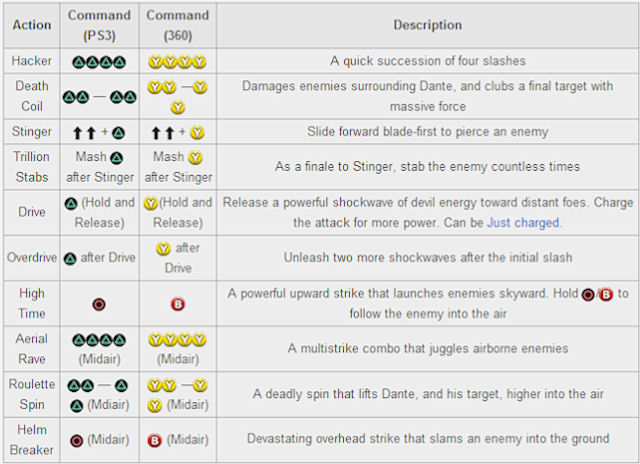 Drive: /\ (hold and release) /\
The charge move of Rebellion. Releases shockwaves up to 3 depending upon button pressed (Overdrive)

Rising Hightime: O (press and hold)
Launcher follow that allows you to rise with your enemy for aerial follow ups.

Roulette Spin Base 2: In air: /\/\ (pause) /\
The alternate aerial combo from DMC4’s Nero. The extra spins launches the enemy even higher.
Stinger: Forward, Forward /\
The classical sword lunge moves that allows you to get in and close the distance between you and your opponent.

Trillion Stab: Forward, Forward /\ (mash /\)
Remixed follow up to Stinger allows you to keep the combos going after knockbacks.

Helm Breaker: In the air O
A vertical downward slash

Dodge: R1
The basic dodge of the game.

Air Dodge: In the air, R1
A simply flip in the air that is neutral in direction. Pressing a direction will allow a very short dash in the specified direction.

Use the Demon-class weapon called Arbiter by holding the button R2 on PS3 / RT on Xbox 360 at all times during these setups. 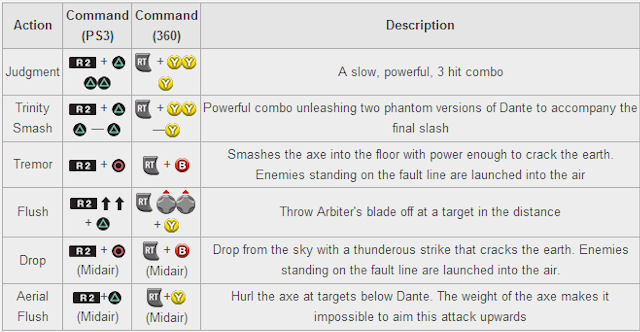 Combo II Trinity Smash: /\/\ (pause) /\ (or hold for last hit)
The last hit of this move is extremely powerful and leaves after images of Dante for extra impost.

Tremor: O
A devastating vertical hit that sends a shockwave forward. The shockwave can launch enemies.

Aerial Flush: In the air /\
Dante tosses the axe from the air.

Drop: In the air O
Essentially a Tremor that brings Dante to the earth delivering a powerful strike.
Launches enemies straight up.

Demon Pull: []
Dante pulls the enemy towards him like the Devil Bringer from DMC4.

Can use Kicker and Leap after Demon pull as well.

Demon Dodge: R1 or L1 timed with opponents attack
A timed dodge that if successfully pulled off powers up the Arbiter’s next attack.

Weapon Changing:
If you initiate the paused combo of one weapon, and switch to the other, you will automatically go into the alternate timed combo of the other weapon.

Example:
With Rebellion: /\/\, (pause) L2+/\
You will go straight into Osiris alternate timed combo ender. You can take this mentality from any one of the three weapons to an other. It doesn’t have to start with Rebellion.

Use the Angel-class weapon called Osiris by holding the button L2 on PS3 / LT on Xbox 360 at all times during these setups. 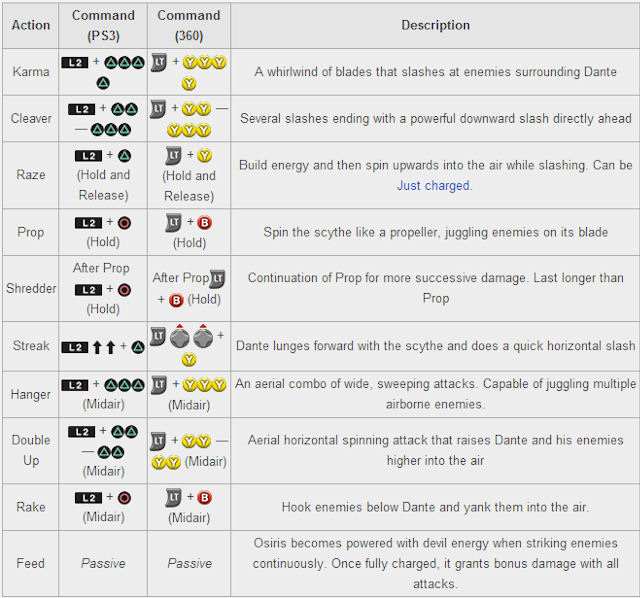 Raze: /\(press and hold)
A chargeable move that creates a swirl of slashes around Dante and launches all enemies around him while launching himself. Charge increases number of hits and damage.

Prop: O
Standard launcher for Osiris as Dante spins the scythe and keeps the opponent juggling. Can be canceled during the spins.

Shredder: O then O
Follow up to Prop that shreds the enemies with more spin but in the opposite direction.

Streak: Forward Forward /\
A swirling lunge forward with the scythe to keep the combo going across long distances.

Air Combo II Double Up: /\/\ (pause)/\/\
The alternate air combo that has more hits and sends your opponent even higher

Rake: In the air O
A vertical scoop that allows you to pick up enemies below you straight into an air combo

Feed: passive ability of Osiris that powers up the weapon as you attack and hit more frequently with it.

Angel Lift: []
Dante uses his angel powers to pull himself towards the enemy. The application of this move is similar to a teleport.

Kicker: During Angel Lift tap [] an additional time
After a pull Dante delivers a kick that sends opponent flying

Leap: During Demon Pull tap X an additional time
After a pull Dante delivers a beastly uppercut that launches the opponent.

Angel Dodge: R1 or L1 timed to an enemy’s attack
A phasing teleport dodge that allows you to phase through enemies unharmed.

Use the Angel-class weapon called Aquila by holding the button L2 on PS3 / LT on Xbox 360 at all times during these setups, after equipping it with Left on the Directional Pad / D-Pad. 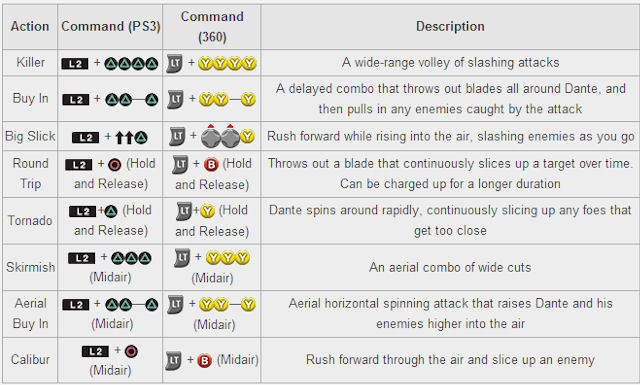 Buy In: L2 + /\/\ (short pause) /\
A delayed combo that throws out blades all around Dante, and then pulls in any enemies caught by the attack.

Big Slick: L2 + Up Up /\
Rush forward while rising into the air, slashing enemies as you go.

Round Trip: L2 + O (Hold and Release)
Throws out a blade that continuously slices up a target over time. Can be charged up for a longer duration.

Tornado: L2 + /\ (Hold and Release)
Dante spins around rapidly, continuously slicing up any foes that get too close.

Calibur: L2 + O (Midair)
Rush forward through the air and slice up an enemy.

Dante obtains the Eryx weapon once he kills the Succubus.

Use the Demon-class gauntlet weapon called Eryx by holding the button R2 on PS3 / RT on Xbox 360 at all times during these setups. 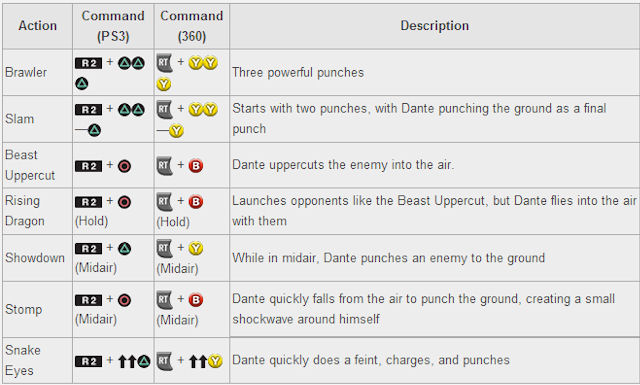 Rising Dragon: R2 + O (Hold)
Launches opponents like the Beast Uppercut, but Dante flies into the air with them.

Showdown: R2 + /\ (Midair)
While in midair, Dante punches an enemy to the ground.

Stomp: R2 + O (Midair)
Dante quickly falls from the air to punch the ground, creating a small shockwave around himself.

Snake Eyes: R2 + Up Up /\
Dante quickly does a feint, charges, and punches.