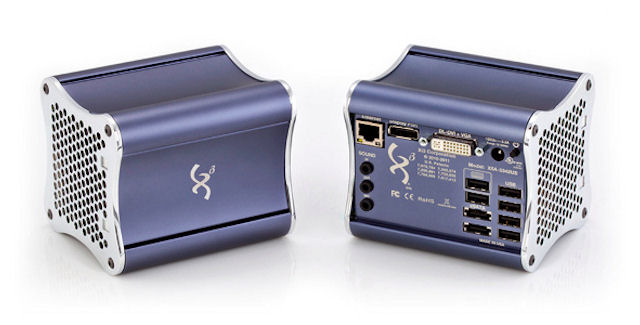 Xi3 Corporation announced at the Consumer Electronics Show 2013 that they are working on a a development stage system optimized for computer gameplay on large high-definition television monitors. In other words, the world may soon see another Video Game Console tentatively titled the Piston or Steam Box if the Valve Software investment and cooperation turns out to be for this console.

Housed in the uniquely shaped, grapefruit-size Xi3 Modular Computer chassis, this new development stage product is being showcased this week at the 2013 International CES trade show in Las Vegas, Nevada in booth #20425 in the Las Vegas Convention Center. Xi3’s new development stage product is designed specifically to support both Steam and its Big Picture mode for residential and LAN party computer gaming on larger high-def screens.

With more than 50 million subscribers around the world, Steam is the digital distribution, digital rights management, multiplayer and communications/community platform from Valve Corporation. Big Picture mode allows members to access and play games through Steam on any connected high-definition television display/monitor. So at least the Xi3 Modular Computer supports all Steam games using Big Picture mode.

“Today marks the beginning of a new era for Xi3,” said Jason A. Sullivan, founder, President & CEO of Xi3. “This new development stage product will allow users to take full-advantage of their large high-definition TV displays for an amazing computer game experience. As a result, this new system could provide access to thousands of gaming titles through an integrated system that exceeds the capabilities of leading game consoles, but can fit in the palm of your hand.”

Xi3 also announced today it has received an investment from Valve Corporation. Xi3’s new development stage computer game system is also being showcased in Valve’s booth (#25730) at CES 2013. No additional details about Xi3’s new system or Valve’s investment in Xi3 have been released at this time.

Here’s a recap of the the Valve “Piston” Console details revealed so far.

Formed in 2010 and headquartered in Salt Lake City, Utah, Xi3 Corporation utilizes “The Power of X” to bring its building block approach to the world of computing, an approach Xi3 applies internally and externally to hardware solutions and software applications. For more information on Xi3 Corporation (an ISYS TechnologiesSM company), please visit www.Xi3.com.
The shape of the three-sided single piece casing, the end plate, and the overall shape of the Xi3 Modular Computer, as well as Xi3, Modular, Xi3 Modular, “The Power of X” and ISYS Technologies are trademarks and unique trade dress of ISYS Technologies, Inc.

Can the Xi3 Modular Computer withstand the weight of a Dodge Ram 3500 truck? Watch the video to find out!

The big question of course is “What’s the Piston Steam Box’s price?” Let’s hope it’s not close to $1,000 as some rumors suggest. It has to be the same price as the Wii U/Xbox 720/PlayStation 4 to stay competitive or no one will buy it, since you might as well get a brand new PC at a high price.

At what price would you buy Xi3 & Valve’s Piston Steam Box?