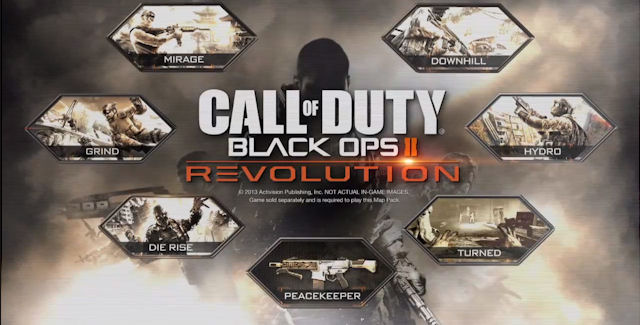 Get a first look at the Call of Duty: Black Ops 2: Revolution DLC trailer that was just released!

“Revolution,” the first DLC Map Pack available for Call of Duty: Black Ops 2. Promising to be one of the most robust and diverse DLC offerings in Call of Duty history, Revolution includes four all-new Multiplayer maps (Hydro, Downhill, Grind, Mirage), a new Zombies map (Die Rise), an exclusive Multiplayer weapon (the Peacekeeper SMG), and a brand new Zombies game mode called “Turned” where you get to play as the Zombies.

The Revolution DLC Map Pack arrives first on Xbox LIVE on January 29th, 2013, with other platforms to follow. Purchase the Call of Duty: Black Ops 2 DLC Season Pass to get Revolution plus the remaining three DLC Map Packs at a discounted price of $50 ($10 less).

Here are the full details on the 1st Black Ops 2 DLC:

Revolution takes players to unexpected new locales the world over. “Downhill” is set in the ski country of the French Alps, where players fight their way down the slopes and through a ski lodge, while avoiding the moving hazards of the mountain’s gondola system. Opponents must dodge the floodwaters in “Hydro” as they contend for dominance of this hydroelectric dam facility in Pakistan, filled with treacherous spillways. “Mirage” pits players in competition amidst the sand dunes of a dilapidated luxury resort in the sandstorm-devastated Gobi Desert, where a range of long-distance and close-quarters combat will mix up the action for all play styles. Finally, “Grind” transports players to the historic birthplace of skateboarding, California’s Venice Beach, where they will battle it out through the ramps and half-pipes of this massive, epic skate park in a multiplayer environment comprised of unique curved architecture requiring players to adapt and learn new ways to take cover. Each map in Revolution delivers a uniquely exhilarating new landscape for tactics and battle.

Revolution also delivers a lethal bonus multiplayer weapon, the “Peacekeeper.” This powerful SMG, accompanied by its own set of weapon challenges for additional XP, is unlocked to all Call of Duty: Black Ops II fans that pick-up Revolution.

Additionally, Revolution transports players to the Far East, where they will attempt to overcome a zombie infestation inside a series of collapsed skyscrapers towering over the remains of an obliterated Chinese city. In this new and original Zombies map, “Die Rise,” players will wield powerful, upgradable Wonder Weaponry as well as combine new buildable devices to fight a relentless army of the undead throughout Escher-esque sceneries over a deep and perilous chasm. And in a twist, Treyarch has added a new game mode, “Turned,” where players can finally complete against each other as a zombie!