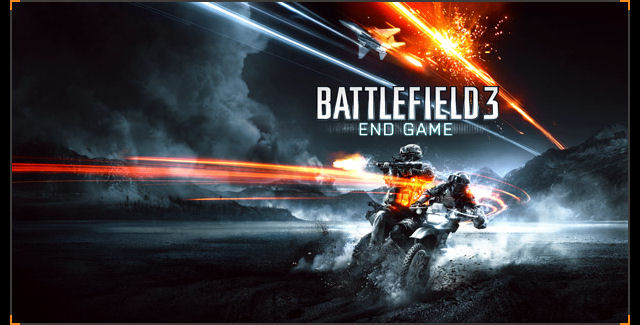 Developer DICE has confirmed the first details for the 5th Battlefield 3 DLC — after Back to Karkand, Close Quarters, Armored Kill & Aftermath — called Battlefield 3: End Game. Which has been given a release date sometime in March 2013.

Description: Battlefield 3: End Game delivers some of the most high-speed warfare to date across four vast maps. Race through enemy lines using the new dirt bike, bringing speed and agility to the Battlefield, or fight back aerial assaults with new lightweight AA vehicles. Coordinate lightning fast attacks and defenses in the return of the classic Capture The Flag game mode. In the skies, the new dropship introduces the ability to turn the tide with rapid deployment air drops of troop transports.

Additionally, an EA spokesperson has mentioned the likely final Battlefield 3 DLC will include a “character in the jungle, Apocalypse Now-style.”

We’ll update you when the exact dates for the different platforms (Xbox 360, PlayStation 3 and Windows PC) get announced.

Are you excited for Battlefield 3: End Game?