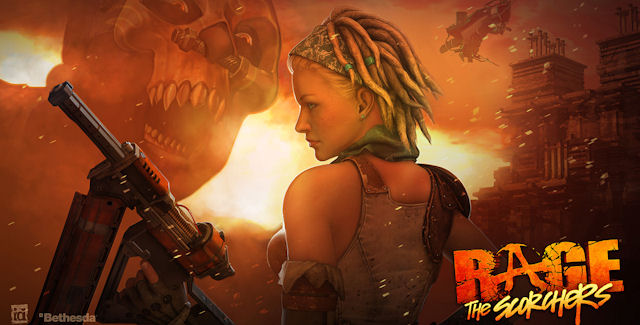 This Rage: The Scorchers walkthrough will guide you through the beginning to ending moments of gameplay with strategy tips for this First-Person Shooter on the PC, Xbox 360 & PS3.

In this brand-new adventure spanning six all-new areas, you will fight alongside new allies to defend the Hager Settlement from a maniacal bandit clan known as The Scorchers. Along the way, you’ll participate in a new season of Mutant Bash TV, encounter new mini-games, and wield the overpowering and brutal Nailgun.

Index of Rage The Scorchers Guides:

The add-on pack also includes ‘Ultra-Nightmare’, a new high difficulty mode, as well as an ‘Extended Play’ option that allows you to play past the original ending of the game – giving you the opportunity to finish collecting items and achievements.

How To Start The Scorchers DLC & Intro

The first part of the walkthrough shows how to reach The Scorchers DLC missions.

Tip: If you’ve just started a new game in Rage, then first play a few of the Halek Hagar missions to unlock it.
Tip 2: If you’re further in the game or have finished it, then go from Subway Town to the Wasteland to start.

Then the DLC’s introduction begins as you meet Sarah and she explains the situation.

Mission 1: Rumbles in the Dark

In the “Rumbles in the Dark” mission you must find the source of the seismic activity and then meet up with Sarah again.

Note: The beginning of this 1st mission is shown at 5:30 in the previous video.

In the “Scorched ReFinement” mission you must make your way to the Refinery beyond the Outrigger Settlement to the West. Then find out what the Scorchers are up to.

Note: The beginning of this 2nd mission is shown at 10:30 in the previous video.

Here’s the “A Big Gamble” mission. Mutants have set a trap to stop you, defeat them. The goal here is to meet up with Sarah again, to let her know what’s going on.

Location Tip: Sarah can be found over at the Jackpots in town. It’s shown at 11 minutes into the following video walkthrough.

Up next is the “Ticket to Oasis” mission. Head over to Mutant Bash Studio and win the Paradise challenge. Once there, talk to JK Stiles about the ticket to Oasis.

Location Tip: The Mutant Bash TV Studio isn’t the same as the Races. Go to the studio with fat guy on a chair (JK Stiles) with lots of TV screens near. You can find it outside Wellspring.

Next, you must return to Jackpots and give Clive the ticket to Oasis.

Rage: The Scorchers Walkthrough continues on Page 2 with Mission 5.