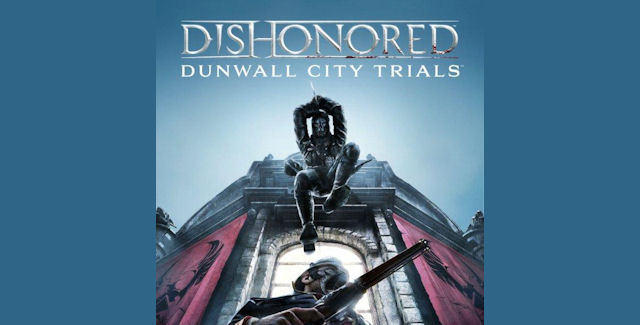 This Dishonored Dunwall City Trials walkthrough will guide you through the beginning to ending moments of gameplay with strategy tips for this action-adventure stealth game’s first challenges DLC pack on the PC, Xbox 360 & PS3.

Dishonored: Dunwall City Trials, the first add-on pack for the critically-acclaimed first-person action game developed by Arkane Studios, is now available for Xbox 360 and PC for $4.99, £3.99, €4.99 (or 400 Microsoft Points). For PS3, the add-on pack will be available later today in North America and on December 19th in Europe.

Please note that viewers must be at least 18 to watch, so no harm comes to those with innocent eyes. This game includes Blood and Gore, Intense Violence, Sexual Themes, Strong Language

Dishonored: Dunwall City Trials include 10 challenge maps that will test and track your combat, stealth and mobility skills. Ten distinct trials await challengers – including an arena battle against waves of enemy AI, a gravity-defying run of drop assassinations, and a race against the clock. Dunwall City Trials also features a whole new set of achievements and trophies as well as a global online leaderboard that will establish the greatest assassins for each challenge.

The challenge maps will require you to creatively combine your supernatural abilities, weapons and gadgets with well-timed stealth and agility tactics.

Tip: You can unlock Expert difficulty on each Challenge individually, by getting at least two stars on the Normal difficulty.

• Assassin’s Run: A true test for accomplished crossbow users, you’ll need to quickly eliminate targets as you move through the level. Just be careful not to kill any civilians.
• Mystery Foe: Collect the map’s four clues without being discovered to investigate which NPC is your assassination target. Complete the level by successfully completing the assassination.
• Bend Time Massacre: Each round of this challenge map begins with your character peering through glass and learning your assassination goal. Once you break the glass, the “Bend Time” effect will begin and you’ll need to race against the clock to complete the objective. Attain higher scores by completing the Bonus Round at the end of each objective.
• Burglars: Sneak into a mansion (easier said than done) to recover six Clockwork Eggs and as many valuables as you can. Make sure you’re not detected – three strikes and you’re out.
• Bonfires: This one is for Blink experts. With the clock running, touch as many light beacons as you can.
• Oil Drop: Be quick on the draw to destroy waves of oil tanks tossed from above. You’ll have to be handy with the steel if you know what I mean.
• Train Runner: A true test of agility, you’ll need to be faster than a speeding bullet in this race to outrun a locomotive.
• Back Alley Brawl: Put all your offensive abilities to the test as you battle hordes of enemies, round after round.
• Kill Chain Massacre: Kill a high number of enemies in a continuous chain using the environment and/or your powers. Take your time before each round to map out a killing-combo strategy. Once you make your first kill, it’s a race against the clock.
• Kill Cascade: Perform a series of drop assassinations as you try to reach the end of the run as fast as possible. Perfecting this challenge is no easy task, but it ends with a surprise twist.

More videos could be added later if you need more tips.