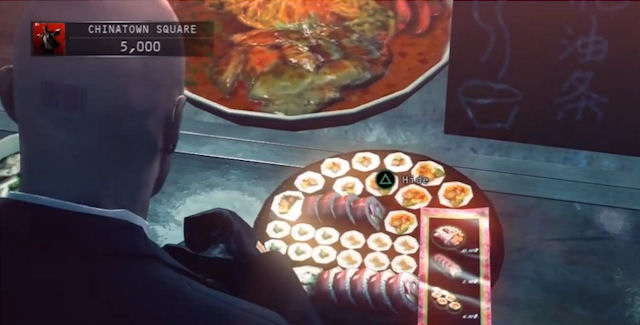 The Hitman Absolution Achievements guide & Trophies guide lists every Achievement & Trophy for this Xbox 360, PS3 & PC Action-Adventure Stealth game and tells you how to get and unlock them.

Location: The 47 sniper headshots can easily be farmed in the very beginning of the last level called “Absolution”.
You will start this level with a sniper rifle and 10 bullets. There are more than 10 enemies in this area. Kill as many as you can with headshots and restart the checkpoint when you run out of ammo. After restarting the checkpoint your overall headshot kills will be saved and you get back your ammo. Repeat this until the Trophy / Achievement pops up.

5. Absolution (50G) — You completed Hitman: Absolution as a professional

7. It’s All in the Wrist (50G) — You successfully performed a lethal throw

Location: Mission 2: The King of Chinatown. Can’t be unlocked during Prologue nor Mission 1: A Personal Contract.
Search for a lethal weapon in any of the levels after the prologue and pick it up. The most common leathal weapons in the game are knives. Go into aim mode and search for a nearby person to kill. Aim on the head and throw the knife. The enemy has to die!
After going through the gate in the very beginning of level 2 you can find a knife near some dumpsters on the left. You can also kill one of the merchants with it.

8. Information is Power (30G) — You collected all evidence

To find all 45 Evidence, check out our Hitman Absolution Evidence Locations Guide.

Location: Mission 2: The King of Chinatown. Can’t be unlocked during Prologue nor Mission 1: A Personal Contract.
To do this you have to become suspicious by causing property damage, killing people or running around with your weapon. You will then have to escape your enemies by killing all of them or hiding in a dumpster. Wait until everything turns back to normal.
After going through the gate in the beginning of level 2 go straight and make a left. You should see a single police guard next to a car and some explosive barrels. Shoot the barrels to cause some carnage and hide in the nearby dumpster until the investigating police officers are gone.

18. Contender (20G) — You participated in a contract competition

19. One With the Shadows (20G) — You escaped the attention of an enemy

Location: Mission 2: The King of Chinatown. Can’t be unlocked during Prologue nor Mission 1: A Personal Contract.
After entering the marketplace in the beginning of level 2 go to the right until you reach an alleyway with a guard. Kill the guard as well as some civilians and wait for more enemies to arrive. Once you’ve got their attention, go up the stairs into the room where “Snowman” (guy with in white clothes & sunglasses) is hiding. Take him out and use his clothes as a disguise. Hide in this room and wait for a couple of seconds until everything turns back to normal.

21. Inconspicuous (20G) — You remained undetected throughout a checkpoint

Location: Mission 2: The King of Chinatown. Can’t be unlocked during Prologue nor Mission 1: A Personal Contract.
After going through the gate in the very beginning of the second mission, go straight until you reach the end of the marketplace area. Pick up a brick or any other object (e.g. bottle) that can be thrown to make some noise. There are two guards standing at the end of an alleyway to the far left and some wooden pallets hanging in the air close to where the guards are standing. Go behind the guards once they start their patrol (so that they cannot see you) and throw an object underneath the wooden pallets. One of the guards should come to investigate. Shoot the metal thing that is holding the pallets when the guard is standing underneath.

Location: Mission 2: The King of Chinatown. Can’t be unlocked during Prologue nor Mission 1: A Personal Contract.
After going through the gate in the very beginning of level 2 you will come to a market place. Some of the food stands have magazines on their counter. Press Triangle (on PS3) or Y (on Xbox 360) to interact with such a magazine while an enemy or police guard is nearby.

24. Rocksteady (20G) — You executed a point shooting with at least 3 kills

Location: Mission 2: The King of Chinatown. Can’t be unlocked during Prologue nor Mission 1: A Personal Contract.
You will get to know the point shooting ability during a tutorial in the prologue (level 1). To use it you need to activate your instincts and press Square (on PS3) or X (on Xbox 360). Then you can mark several targets to be eliminated. This even works against civilians. Right after leaving the starting area of the second level you will run into lots of civilians on a marketplace. Shoot three of them with this ability.

Location for both: Mission 2: The King of Chinatown. Can’t be unlocked during Prologue nor Mission 1: A Personal Contract.
To subdue a person you need to equip your bare fists. Attack them from behind to choke and render them unconcious. After that drag the person to a nearby dumpster and press Triangle (on PS3) or Y (on Xbox 360) to throw them in there. After going through the gate in the very beginning of level 2 there will be a dumpster to the left. Normal civilians cannot be subdued. Search for a merchant or guard. Persons that can be attacked are marked in yellow when activating the instincts.

28. Kingslayer (10G) — You fulfilled Birdie’s contract and eliminated The King of Chinatown

33. The Bartender Always Knows (10G) — You questioned the bartender

35. Like Stealing Candy From a Baby (10G) — You circumvented Lenny’s crew and secured Lenny

38. A Heavy Blow (10G) — You assassinated the facility leaders

39. Faith Can Move Mountains (10G) — You have defeated Sanchez with your bare hands

41. Jailbird (10G) — You infiltrated the courthouse and accessed the jail

43. True Form (10G) — You visited Tommy the Tailor and acquired a new suit and gloves

Tips & video guides can be found in the Achievements section above.

1. Top of Your Game (Platinum) — Collect all trophies

5. A Taste for the Game (Bronze) — Complete 10 challenges

7. Jack of All Trades (Silver) — Collect all play styles

8. It’s All in the Wrist (Bronze) — Achieve a lethal throw kill

To find all 45 Evidence, check out our Hitman Absolution Evidence Locations Guide.

17. Partners in Crime (Silver) — Play a contract created by a friend

20. One With the Shadows (Silver) — Escape attention from enemies

24. One of the Guys (Silver) — Blend in successfully

31. Catch a Ride (Bronze) — Enter the train in the train station

33. All Bark and no Bite (Bronze) — Assassinate Wade

36. Like Stealing Candy From a Baby (Bronze) — Pacify Lenny the Limp

Please comment if you have any Hitman Absolution achievement/trophy unlock tips of your own. Kudos will be given. – Thanks for visiting!