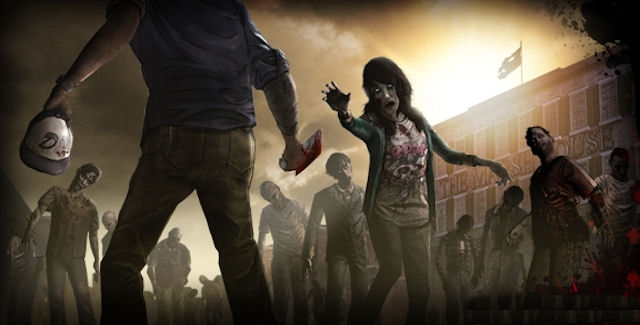 Our The Walking Dead Game Episode 5 walkthrough will guide you through the beginning to ending moments of gameplay with strategy tips for this Horror Survival Adventure game on the PC, Xbox 360, PS3, Mac & iOS.

Telltale Games brings the world of Robert Kirkman’s award-winning comic book series The Walking Dead to life in this fifth video game in a 5-part series. This fifth part is called “The Walking Dead: Episode 5 – No Time Left”.

Let’s first watch a RECAP of The Walking Dead Game: Episode 4 to see all the different choices everyone made in the previous episode! Did you: kill the boy, handle Vernon, bring Clementine, save Ben, and reveal the bite?

Chapter 1: Into The Fire

New to The Walking Dead game series? To see the first four episodes, check out our The Walking Dead Game Walkthrough (the rest are listed above). Then continue here with the start of the fifth episode…

Back for more The Walking Dead game? Episode Five picks up immediately where episode four ended. Clementine has been taken: kidnapped by an unseen enemy. Lee must set out onto the streets and rooftops of the city of Savannah, a place now completely overrun by the undead, to get her back.

Let’s start the walkthrough with Chapter 1.

Will be added later.

The Walking Dead Game: Episode 5 walkthrough continues on Page 2 with Chapter 5, the Ending!