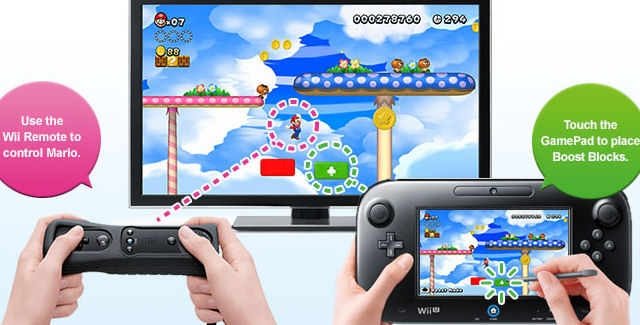 Looking for New Super Mario Bros U cheats and tips for Nintendo’s new platformer Wii U game? Here are some unlockables including fun cheats & codes. This guide includes tips and hints on how to unlock World 9, how to earn infinite lives / unlimited extra 1UP’s, and more cheat codes to secret levels.

You can do the 1UP trick to get unlimited lives by finding a Koopa Troopa coming down a set of stairs. It’s the same trick that’s been in every Mario Bros. game since the original NES one. Technically it can be done in any level where you see a Koopa Troopa or any enemy with a shell on its back walking down the stairs.

Position Mario (or any player character) on one of the steps of the stairs that the Koopa Troopa is walking down on. You have to jump on top of the Koopa Troopa coming down the stairs at exactly the moment when he’s near the end of the step you were standing on (while not pressing the jump button when you hit it), so that the Koopa Troopa’s shell will continously ricocheted off that stair step’s wall and under Mario’s feet. Mario then automatically continues to jump on the Koopa shell, and the Koopa shell in turn will bounce off the wall, making it so that Mario (or Luigi/Toad/Mii) keep jumping on it. Then the extras lives will pile up to infinite!

Additionally, the flying squirrel suit can easily give you unlimited lives if you keep floating in the air when jumping on enemies in areas where there are at least 5 Koopa Troopa’s walking around, which if you don’t kill them keep coming out of their shell, allowing you to keep jumping on them, then floating around, and jumping on them some more to get lots of 1UP’s.

You can see how the 1UP cheat is done at the end of this gameplay presentation video:

Unless you have “friends” who try to make you die on purpose (Yeah, I’m keeping my eye on YOU!), you’ll probably end up collecting so many coins that by the end of the game you’ll have lots of lives without needing any cheats. Since every 100 coins gives you an extra life.

How to use Help Blocks properly:

• A player can pick up the GamePad any time (thanks to the easy drop-in play) and help out by placing Help Blocks AKA Boost Blocks above ravines to stop people from falling to their death.
• You can distract enemies via the Touch Screen, touch an enemy and it will temporarily freeze instead of attack the other on-screen players.
• These Help Blocks can also be placed right under hanging Thwomp Blocks to stop them from falling on other players.
• Skilled players can help each other out by placing the Help Blocks diagonally from each other moving up, so that Mario can wall-jump off the sides of the tactically placed Help Blocks to quickly move upwards when there is a rush to do so.
• A simple method of using the previous tip is to place the Help Blocks far enough from each other to make long jumps possible. Teamwork will allow skilled players to long jump through entire levels that would normally be difficult to navigate!

This New Super Mario Bros U Cheats Presentation gives tips on how you can use the Wii U GamePad’s Help Blocks to reach hard-to-get Star Coins, power-up items, etc.

How To Unlock Hidden Exits To Secret Levels & Map Shortcuts

Here are the locations of all five major shortcuts in New Super Mario Bros. U. Hidden level exits enable you to access secret levels, and after finishing those you unlock paths that help you skip entire worlds!

This video guide shows you how you can unlock all 12 Hidden Flagpole Exits to Secret Levels:

The next video guide shows you how you can unlock all 5 Hidden Map Shortcuts:

How To Unlock World 9: Superstar Road & The Propeller Suit

Super Mario World’s Star Road makes a return as World 9: Superstar Road, which you unlock after finishing the game and collect every Star Coin in Worlds 1 to 8. That’s to say, you unlock each of the 8 levels in World 9 by collecting the Star Coins in a given World.

In World 9 you’ll also find a Mario power-up exclusive to this world: The Propeller Suit!

How To Get Fireworks At The Flagpole

Here’s how to get Fireworks at the end of the level Flagpoles.

How To Get 5 Stars On Your Save File

To get 5 shiny stars on your save file, you’re going to have to unlock pretty much everything in New Super Mario Bros U and never use an Assist Block (AKA don’t use a Super Guide Green Block).

To clear 100% of the game, you’ll have to do the following:
• Completing the game by defeating Bowser,
• Finish every single Level in the 8 Worlds (73 levels total), although you do not have to complete the 9 World 9: Superstar Road levels at first,
• Find all 246 of the Star Coins (Star Coins guide link at the top of this page); start with those in Worlds 1-8, the final two of which will be given to you by finishing all World 9: Superstar Road levels which is done by unlocking the final 9th level there, and the last one by doing the following…
• Find all the Secret Exits,
• Find & finish all the Normal & Secret Flagpoles in levels; this is all detailed in our Star Coins guide (link at the top of this page),
• Catch Nabbit in Worlds 1-7.

Warning: To get the 5 shiny & sparkling stars on your save file, do NOT use Assist Blocks. They appear after you lose a few lives in a level, and it’s ok if they appear, as long you don’t activate them. Say NO to Luigi helping you if you accidentally do hit the green block and you’ll be fine.

Reach The End Of A Level Easily

Use the Super Guide Green Block: If you die a few times in a level, you can get a little help from the Super Guide (also called the Assist Block). Hit the green block that appears, and Luigi will come along and show you the way to the goal.

Video guides thanks to: Gamexplain

Do you know of any other New Super Mario Bros U cheats, tips or unlockables? Let us know in the comments, you’ll get credit for finding out. – Thanks for visiting!