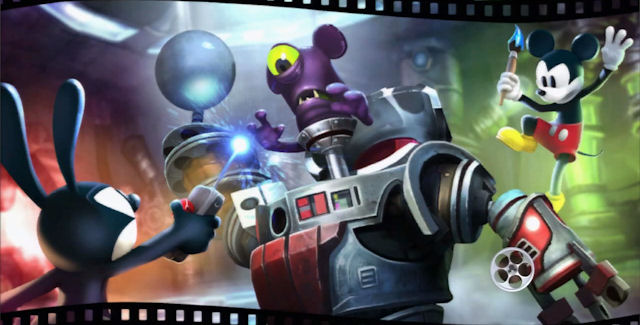 In “Disney Epic Mickey 2: The Power of Two”, gamers can play as Mickey Mouse and for the first time ever, Oswald the Lucky Rabbit, Walt Disney’s first cartoon star, in an all-new adventure of creativity and discovery.

Mickey and Oswald will join forces as true partners. Here are the creators of the game giving you some tips about both characters and the game itself. Most notably Warren Spector himself talks about Oswald the Lucky Rabbit – Mickey Mouse’s older brother – and his powers.

How To Change The Game’s Music:

Creator Warren Spector and the developers at Junction Point Studios talk about the soundtrack. They even reveal that the music can be changed by your in-game action, mirroring the overall theme of Creation VS Destruction each having a different effect on the game world.

Collect Pins To Boost Your Character:

There are over 150 different Disney Pins you can collect throughout Epic Mickey 2: The Power of Two, which will probably take you multiple playthroughs to find (one good, one evil, perhaps?). Well those Disney Pins aren’t purely there to look pretty like in the first Epic Mickey game.

In the sequel these Disney Pins will have an actual use, allowing you to add different boosts and buffs to your player character, so collect each one you encounter! Find out what bonus they add by viewing them in the Pin Shop on Mean Street.

Mickey with his magical paint brush that allows him to wield paint and thinner.

Oswald with his powerful remote control that allows him to command electricity.

Warren Spector and Junction Point interviewed on creating the complex characters of Ortensia, The Mad Doctor and the Blotworx.

There are no other Epic Mickey 2 cheats on Wii, Wii U, Xbox 360, PS3, PC & Mac yet. So until they are discovered, we made the handy Epic Mickey 2 guides listed above to help you with tips and tricks for the game!

Do you know of any Epic Mickey 2 cheats or unlockables?
Let us know in the comments, you’ll get credit for finding out. – Thanks for visiting!