Nintendo Wii U Launched in America 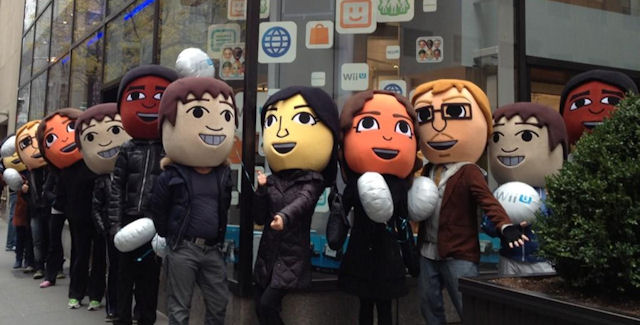 Nintendo’s Wii U console launched Sunday November 18th, 2012 in America and Canada! As the first new home video game system in six years, it’s aiming to change the landscape of games and entertainment with its new Wii U GamePad controller. With more than 30 launch-day games for all types of players, Wii U arrives just in time for the holidays and is poised to be the must-have gift of the season.

Mii characters invaded New York the past day to celebrate the U.S. launch of Wii U:

The Wii U Basic Set will be available at a suggested retail price of $299.99 and includes a white Wii U console with 8 GB* of internal storage, one white touch-screen GamePad controller, AC adapters for both the console and controller, a sensor bar and an HDMI™ cable. The Wii U Deluxe Set will be available at a suggested retail price of $349.99 and its components are black. This set includes all elements from the Basic Set, as well as the Nintendo Land game, increased internal storage totaling 32 GB*, a console stand, a GamePad stand and a GamePad charging cradle. People who purchase the Deluxe Set also will be enrolled in the Deluxe Digital Promotion, which allows Deluxe Set owners to earn points when they purchase downloadable games and then redeem those points for codes that earn them credit toward even more fun digital content in the online Nintendo eShop.

Wii U GamePad: The controller features a 6.2-inch touch screen that redefines how people interact with their games, their entertainment and one another. It comes with dual analog sticks and traditional buttons for gaming. The GamePad is wirelessly connected to the console, providing a perfectly integrated second-screen experience with the TV, no matter how it’s being used. Different players can enjoy different experiences in the same game, depending on which controller they opt to use. Players can even move select games from the TV to be played on the GamePad or use the GamePad as a TV remote control.

Wii U Games: Wii U is launching with 29 packaged games, plus a handful of digital games, marking the largest launch lineup in Nintendo history. Nintendo-published games available on launch day include Nintendo Land™, New Super Mario Bros. ™ U, SiNG PARTY™ and NINJA GAIDEN™ 3: Razor’s Edge. Third-party publishers also will have an amazing array of games available on launch day, such as Just Dance® 4, Assassin’s Creed® III and ZombiU™ from Ubisoft, Skylanders Giants™ and Call of Duty®: Black Ops II from Activision Publishing, Inc., Disney Epic Mickey 2: The Power of Two from Disney Interactive, EA SPORTS™ FIFA Soccer 13 and Madden NFL 13 from Electronic Arts, NBA 2K13 from 2K Sports and Batman: Arkham City™ Armored Edition and Scribblenauts™ Unlimited from Warner Bros. Interactive Entertainment. A number of these titles will also be available for purchase digitally in the Nintendo eShop alongside a strong launch-day lineup of downloadable digital-only games, including Little Inferno from Tomorrow Corporation, Trine 2™: Director’s Cut from Frozenbyte, Chasing Aurora from Broken Rules, Mighty Switch Force: Hyper Drive Edition from WayForward and Nano Assault NEO from Shin’en. Wii U owners can expand the storage capacity of their systems by adding their own USB external hard disc drives. Downloadable content for select games, such as additional levels or maps, will roll out in December following a system update. Wii U is backward compatible with almost all Wii™ games and Wii accessories.

Miiverse: Miiverse™ is a global community in which gamers from all over can share experiences, discuss games and learn more about the video games they love. Using their personalized Mii™ characters, players with broadband Internet access can enter Miiverse and see games and entertainment content they have interacted with recently, expressed interest in learning more about or that their friends are playing or discussing. They can also challenge their friends to play together, ask for help from the Miiverse community about a difficult level or discover elements of their favorite games they never knew existed. Miiverse is integrated seamlessly into the Wii U experience.

Video on Demand: In the coming weeks, an array of favorite movies and TV shows will become available to Wii U owners on Amazon Instant Video and to Hulu Plus and Netflix subscribers. These services will also be accessible from Nintendo TVii. Wii U owners will also be able to watch YouTube videos and channels through the YouTube application, as well as sign in to their account and control the application with the GamePad. Wii U owners who have connected their systems to the Internet will receive a notification as each video application becomes active.

Nintendo TVii: In December, Nintendo will activate this unique application that will transform how people find, watch and engage with TV shows, movies and sports. Nintendo TVii makes watching TV simple and fun by bringing together a program guide, remote control and social interaction into one, seamless second-screen experience on the GamePad. Nintendo TVii comes with Wii U at no additional charge and requires no additional equipment. It works with existing cable and satellite channels. Viewers can engage with others in a variety of ways, such as commenting on moments as they happen on live TV, and then sharing those thoughts via Miiverse, Facebook and Twitter. Users can also discover more about what they’re watching, as information from a variety of sources is automatically linked to the program they are watching, including sports data. Nintendo TVii is customizable for every member of the family.

Wii U Video Chat: Wii U owners can video chat with one another on a broadband Internet connection using the built-in camera and microphone of the Wii U GamePad. Friends and family members far away can see and talk with one another in real time using this service at no additional charge.

Internet Browser: Wii U comes with a browser that lets users surf the Web from the comfort of their couches. Users can browse purely on the GamePad while watching a program on TV. Additionally, they can pause a game, launch the browser and search for something, and then re-enter the game right where they left off.

“The value of Wii U goes well beyond day one,” Fils-Aime said. “Nintendo will be enhancing the Wii U experience with continuous updates and new services for Wii U owners.”

Is your body ready for the Wii U console? 😀

Will you be getting a Nintendo Wii U at launch?