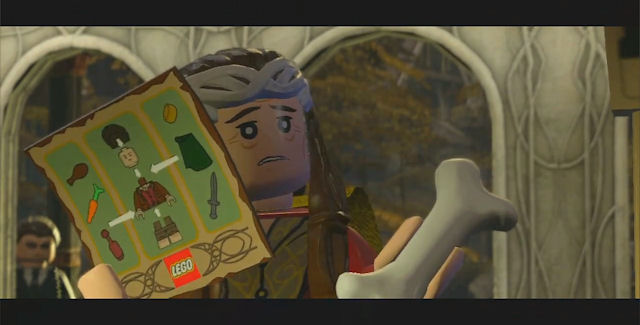 Let’s take a look at some Lego Lord of the Rings easter eggs! They can be found if you pay attention! 🙂

Easter eggs have been confirmed for Lego Lord of the Rings. Watch videos of them all below.

This hilarious Matrix movie easter egg can be found at the end of “Level 2: Weathertop”. Here you can see a character from the Matrix movie make a cameo in the background of a cutscene where the Elven Lord Elrond puts a sick Frodo back together wrong using Lego instructions, which in itself is a Lego bricks joke.

It’s easy to miss this easter egg, so pay close attention during the cutscene 8 minutes into this video…

There’s an easter egg sound hidden at the top of Weathertop.

At some point in the game you can climb and then jump off the top of Weathertop. As you jump and fall down, right before you’re about to hit the ground, you’ll hear the “Eagle Sound” familiar to fans of the Assassin’s Creed games when you jump off tall buildings using the “Leap of Faith”, which is accompanied by that same Eagle-screeching sound. Nice homage! 🙂 — Thanks to Jeff for discovering it!

In Rohan you can get a quest from a man who says he used to be a Citadel Guard until he took an arrow to the knee. Seriously, no joke! It’s in this game. 😛
In The Elder Scrolls V: Skyrim game, guards often repeat the same line: “I used to be an adventurer like you, then I took an arrow in the knee”. Which became an internet meme.

You can find the guard who says this in the guard tower in the main town of Rohan at Edoras (not Helm’s Deep). He’s the NPC that gives the fetch quest for bandages. — Thanks to Jake for discovering it!

In Cirith Ungol, there is a skeleton hanging upside down from a web strand, in a classic Spider-man pose. — Thanks to JKSullivan for discovering it!

In Cirith Ungol there’s a secret room filed with orcs controlling lights, and you kill each orc on the lights. It also makes a funny sound when you get caught in the light. This is a Snake reference to Metal Gear Solid. To get past the lights you travel in a box through them (Frodo’s cloak makes you a box haha!), and the sound it makes is the same sound you hear when you get caught in Metal Gear Solid. — Thanks to Jake for discovering it!

Peter Jackson, the director of the Lord of the Rings trilogy of movies, makes several cameo appearances in the video game.

Appearance #1: During “The Battle of Helm’s Deep” level fight, when the Rohirrim are defending the gate and are bombarding Uruk-hai’s on the gangway with various items, during that cutscene, Peter Jackson briefly appears and chucks one of the golden Oscars statues – that he won for the Lord of the Rings movies – at the enemies.

Appearance #2: In the village of Bree, sitting on the fence surrounded by barrels of carrots is also Peter Jackson. Since the director also had a cameo in The Lord of the Rings: The Fellowship of the Ring movie as a man eating a carrot outside the Prancing Pony! — Thanks to Matt for discovering these two!

In “The Battle of Pelennor Fields” level, when you fight against the Nazgul in “Free Play” Mode, you have to find a Green Herb and a Red Herb. If you combine then, you get a Medic kit. This is a reference to Resident Evil video games where you have to do the same thing to get a health boost. — Thanks to Puma for discovering it!

During the Mines of Moria level when you are at the area around the Bridge of Khazad Dum, there is a secret room where you unlock a mini-kit, and the puzzle to get it is the skeleton organ puzzle from the movie The Goonies. — Thanks to Aerin for discovering it!

Harry Potter and the Prisoner of Azkaban Easter Egg

If you have the “Boss Disguise” Red Brick turned on when fighting Shelob in between “Level 12: The Secret Stairs” & “Level 13: Cirith Ungol”. Then the spider will be wearing roller skates like the spider from Harry Potter and the Prisoner of Azkaban! 😆 — Thanks to Celeste for discovering it!

I’m sure there’s even more than these.

Have you found any Lego Lord of the Rings easter eggs?