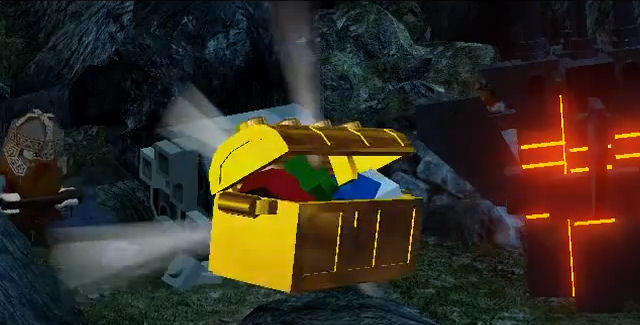 Part 5 of the Lego Lord of the Rings Treasure Chests video guide shows #41 to #50:

Here we will give you voice-over tips to help you find all Treasure Chests in Level 5 “The Mines of Moria”.

1) In the beginning area, on the right side at the top is a chest blocked by a strong pull bar, so use Sauron or Lurtz to pull it open to get the chest.
2) On the left side of the opening area, use Sauron or Lurtz on the strong pull bar to get 1 out of 3 statues pulled out. The other two are in the second area of the level with the cave troll, up top, one on each side, again pulled out with strong pulls. When you pull out the third you will get the chest.
3) In the next area, just after the sequence where you are in Gandalf’s protected shield, on the right side of the screen will be a morgul block so destroy it either as Sauron or Aragorn. There will be two more to destroy in this area. The second is just north of the first, in the back right of the area opened up after using the Berserker’s bombs or mithril fireworks on the mithril blocks. The third and final one is back in the main path to the left, set against the north wall before the door section to go forward.
4) In the same area behind the mithril bricks for the second part of number 3, destroy the carts to put some pieces on the Gollum wall and then slowly climb to reach the chest at the top – the wall’s top half always looks incomplete, but you can still climb up slowly through that section to reach the chest.
5) In the same area as 4, to the right of Gollum’s climb wall, in the ground is a rope point to pull as Sam. The chest is pulled out.
6) In the next area, on the large staircase that opens the area, walk to the bottom of the second set of stairs and to the right blocking the secret area are mithril bricks, so use the Berserker’s bombs or mithril fireworks to blow them up and enter the secret area. Inside is a giant machine kind of like a slot machine with three rotating wheels with colors on them. You have to stand on the switch on the ground in front of the machine to match the three colors on the sign to the right of the structure. When the color enters the block, stand on the switch. Do that three times to get to a second set of three colors to match and then finally a third set. When you finish that third set the drawbridge on the right will be fully lowered so walk across and get the chest.
7) In the same secret area, on either side of the machine high up on the walls are targets. Shoot each to make them lower the chest cage and the targets themselves. Then shoot both targets again and the chest will drop and be able to be picked up.
8) Back out in the main area of the level, through the hobbit hole, walk to the back of the column to pick up a chest.
9) In the final area of the level where you are being shot at by orcs and are standing next to a mini-waterwheel kind of thing, over to the right will be a dark cave so switch to Frodo to walk in and get the chest.
10) In the same final area, in the top section will be some targets high on the wall to shoot. They will make the chest appear once shot.

Part 6 of the Lego Lord of the Rings Treasure Chests video guide shows #51 to #60:

Here we will give you voice-over tips to help you find all Treasure Chests in Level 6 “Amon Hen”.

PLEASE NOTE – You need some mithril special items to be able to get all the collectibles in the level – the mithril cluster bow, the mithril rope and mithril shock hammer (but only the bow if you are only going for minikit chests). Check out the blacksmith design section of the site for info on how to get those designs. Also, this level has several instances of multi-tiered objectives, like destroying several morgul bricks, shooting a bunch of targets and meleeing several statues. So, be sure to not simply go for all of those and miss other chests that come up as you are going for all objectives for one single chest.

1) In the opening Frodo sequence, after making Boromir move for the first time, you have to go up a bridge. To the left of that bridge on the ground are some bricks you can destroy. The chest is behind those bricks.
2) A little later, above a hobbit hole you have to go through to the left of a staircase you will see a target in the air. Hold B and on the bottom of the menu pick the mithril cluster bow to then aim up at the target and shoot it. There are 5 more targets to shoot in the level. PLEASE NOTE – some of the targets come after other chests – this is also a very odd one because there are only two targets and then 4 statues you have to melee that add up these six. The second target will also be in the Frodo section where you have to break a lot of objects to put together a catapult. In the upper right area where that catapult will be made is a target so shoot it with the bow. Later in the Frodo section, the last time you make Boromir run ahead is under a large stone doorway and you had to have gone through a hobbit hole and thrown a rock. Up where you came out of the hobbit hole will be a statue on the right. Melee it to get progress for this chest. The other statues will be in the next section of the level. Statue 2 is on the left side of the beach just to the right of the strong pull bar at the start of that section. Statue 3 is just over a fallen tree where you had to use Gimli to destroy a cracked brick blocking the path. And the final statue, the sixth and final component for this chest is above the dark Frodo cave and to the left of the final morgul brick you had to destroy.
3) Right after you make Boromir run ahead by shooting the catapult to knock down the statue head, at the top of that path you will see a target in the trees. Shoot it to make another rock for the catapult roll down and into the device. Run back down the path and shoot the catapult again to make the chest fall down onto the upper part of the path.
4) In the next section of the level, on the beach, over to the right will be a morgul brick statue, so destroy it using Sauron or Aragorn. There will be three more in this section of the level. One is also on the beach but on the left side, in the area behind the strong pull bar. The next one is further in the level when you have to swing across a pole as Legolas and push a block down to advance. Over to the right up top where the brick to push down is will be the final morgul brick to destroy. That last is in the final area, above the Frodo dark cave where the last statue to melee also is. The morgul statue is on the right side and destroying that one will get you the chest.
5) Also on the beach, at the top right side will be a statue that as Sam you can pull apart with the rope. Now as Gandalf or another wizard character you must put the 4 pieces back together in the order to match the other statue. The bottom piece is plain and gray. The second piece has a purple strip and a few bricks in the middle at the top of the piece. The third piece also has a purple strip but its bricks in the middle will be at the bottom to match those of the lower piece. Then put the final piece on and the chest will appear between the two statues.
6) When you had to push two columns across a track to jump up to the next area, stay on the higher column. From there, you should see a bar on the boulder at the top right of the screen. Jump to it and grab on and then jump more to the right to land in a little hollowed out space in the rock with the chest in it.
7) A little further up the path there will be a dark cave so use Frodo to go inside and destroy the rock on the left side to get the chest.
8) In the next section of the level, you have to defeat many uruk hai. In the open area where you will see a cracked Gimli brick at the top, first come to the bottom right of the screen to find a path to mithril blocking the secret area (if you go up the path created by destroying the cracked brick first, you are taken out of this area). So use the Berserker’s bombs or the mithril fireworks to destroy it and get inside. Inside, use Sam’s rope to pull down some platforms. Jump up them, switch to Legolas to shoot the target and then keep going up until you are by a hobbit hole. Jump up and over to the right to use Sam’s fire to burn the plant blocking the hole, then jump back down and go through it. Once through the hole, switch to Legolas to jump up to the bounce mushroom and jump high on it to break the top of the cave above you and then jump high one more time to get the chest.
9) In the boss battle section, over to the right up high is a Sam rope point and when you pull it, 5 targets appear around the area, up high. Shoot all 5 as Legolas to get the chest. There will essentially be two targets on the right half and three on the left of the area.

Part 7 of the Lego Lord of the Rings Treasure Chests video guide shows #61 to #70:

Here we will give you voice-over tips to help you find all Treasure Chests in Level 7 “Taming Gollum”.

Part 8 of the Lego Lord of the Rings Treasure Chests video guide shows #71 to #80:

Here we will give you voice-over tips to help you find all Treasure Chests in Level 8 “The Dead Marshes”.