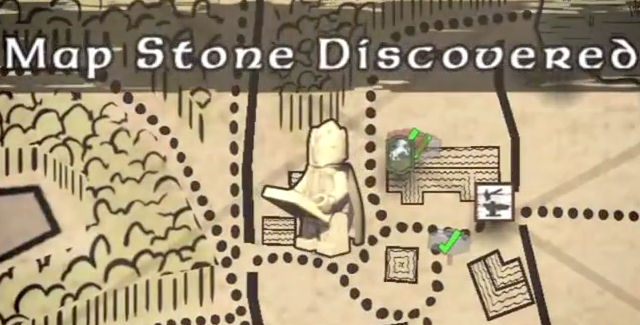 How To Find Map Stones: Map Stones are fairly easy to spot as they are lifesize statues on pedestals and they hold a map. They appear in most overworld sections of Middle-earth (AKA the open world hub areas you are in between main story missions).

Important Tip: Be aware that once you access your first map stone statue, you can fast travel to any other one in an area you have been to – even if you have not yet accessed the map stone statue there. So, once you fast travel to another stone, you simply hit the B button (or whichever is your unlock action button/key when you walk up to it) on the stone to add that one to your list.

In the process of finding them all you can unlock the “Of all the inquisitive Hobbits.” 30G Achievement / Bronze Trophy) by unlocking all the Map Stones in Middle-earth in Single Player Only.

Here’s how to find Map Stones in this guide for Lego Lord of the Rings. Jeff will be your voice-over guide in the videos.

Below we’ve listed the Map Stones in the order you might find them in as you progress through the game. Take the following steps to unlock each one; where available.

Part 1 of the Lego Lord of the Rings Map Stones video guide shows #1 to #8:

Map Stone #1 – Rivendell – This stone is set against a wall next to a staircase you must ascend for a main story mission, and is roughly in the center of town.
Map Stone #2 – Bree – Since the town is so small, this one is hard to miss. It is set against a fence in the center of town.
Map Stone #3 – Hobbiton – This map stone statue is set against an arched bridge that spans the river that runs through the middle of town.
Map Stone #4 – Weathertop – This one is one of the more obvious ones as it stands along a path in an open area as you travel to the main story mission with ringwraiths atop the mountain.
Map Stone #5 – Mines of Moria – This statue stands just outside of the entrance to the mines, near the water, but standing against the mountain.
Map Stone #6 – Emyn Muil – Just after you finish the Fellowship of the Ring set of missions, you have control of Sam and Frodo looking up a path. Just ahead, on the right side of that path, is this map stone statue.
Map Stone #7 – Lothlorien – In the city, there is a grand staircase leading to a story cutscene. Just to the right of that staircase, in a little bush alcove/ inlet, is this map stone statue.
Map Stone #8 – Dead Marshes – Right smack in the middle of the marshes on one of the small islands. Since everything around is low to the ground, it is easy to spot. Best accessed when not in the story mission.

Map Stone #9 – Edoras – In front of the main building in the center of town where the cursed King Theoden stands.
Map Stone #10 – Helm’s Deep – Out in the open battlefield to the far left of the ramp that leads into the keep itself.
Map Stone #11 – Cirith Ungol – On the world map, this map stone is just west of mount doom, perfectly aligned with the door in the drawing of mount doom. The statue is in an open field area and will likely be just in front of you when you switch to Sam and Frodo to do the final mission.
Map Stone #12 – Isengard – This is set against the outer wall of Isengard and is best activated after the mission in the area. On the map, isengard and this map stone are just west of the R in Rohan.
Map Stone #13 – Minas Tirith – This cannot be reached until you have finished the story mission involving the city. Then, you can either fast travel to the map stone and then activate it or approach the city on foot from the east and walk through the front door which transports you to the top courtyard and the stone is in that courtyard.
Map Stone #14 – The Black Gate – This map stone will also likely be activated right before you do a story mission. When you are about to do the next to last story mission, called the black gate, you will have a green arrow to walk into a group of cavalry. Instead, first, on the left of that path is this map stone.
Map Stone #15 – Minas Morgul – Due east of minas tirith on the map is minas morgul, and the map stone is on the west side of the lake on the map there, out in the open, just southwest of the witch king character token.
Map Stone #16 – Amon Hen – Amon Hen is west of the dead marshes and is a small forest area on the map. It is also the area with the story mission of Boromir chasing Frodo to get the ring. The map stone is on the path between the two sections of forest on the map, and is set against a hill near where you would have to climb up to continue.

“Finding them is not so much the issue, activating them is. I went through the whole game and found I saw a map stone on-screen, but before I could reach it the story triggered and I was off on the next mission, thus leaving the map stone behind. However after the mission I viewed the map and saw that map stone and didn’t think anything of it. — After I beat the game I searched for hours on the map to find the ones I “thought” I missed. It turns out I had to go back to the ones where the story mission kicked in before I could reach the stone and activate them after traveling to a couple and clicking on them the achievement/trophy for finding all map stones unlocked.

So for people asking about the ones they missed. I don’t think it’s a miss, it’s more of the story getting in the way. If you beat the game, the ones
that seem to be missed are Minas Tirith, Helm’s Deep, & Isengard. (There may be more however these were the 3 I revisited in Free Play Mode and they all needed to be activated even though they appeared on screen.) Up popped the ‘Of all the inquisitive Hobbits’ achievement/trophy.”

Please check our at the top listed Lego Lord of the Rings guides for tips to find 100% of the collectibles.

If you have any questions or tips about Map Stones, please comment below and we’ll give you credit for your finds! – Thanks for visiting!