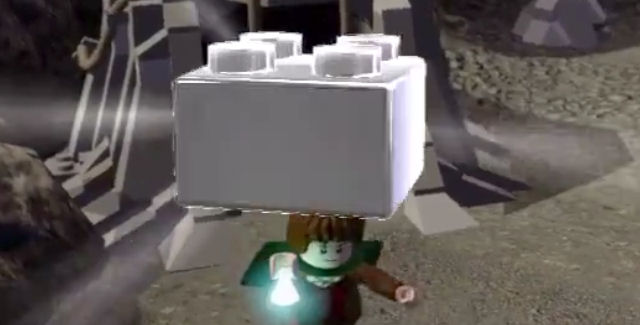 There are a total of 250 Mithril Bricks in Lego Lord of the Rings. Locate ’em all!

Goal: The Mithril Bricks can be collected in many different ways. About half of these come from finishing levels in the game’s Story Mode that you complete, finishing levels with True Adventurer status, finding the Blacksmith Designs in a level, and having all Treasure Chests found in a level. So, the text guide below will be for the ones not gathered those ways.

In the process you can unlock the “My Precious…” 50G Achievements / Gold Trophy, as well as adding more fun to the game for your inner collector by finding them all.

Here’s how to find Mithril Bricks in this guide for Lego Lord of the Rings.

Protip: Go and find the “Mithril Brick Finder” Red Brick first. It’ll make it a lot easier to find all the Mithril Bricks. You can either unlock it using the B72D7E cheat in the pause menu’s “Extras” Enter Code section, or find it in Middle-earth.

Below we’ve listed the Mithril Bricks in the order you might find them in as you progress through the game. Take the following steps to unlock each one; where available.

Part 1 of the Lego Lord of the Rings Mithril Bricks video guide shows #1 to #10:

Mithril Brick #1 – Bree – On the right side of the inn, you can jump the fence and as any short character you can crawl through the tunnel set into the wall on the left. Once you do, you will run right into this brick.
Mithril Brick #2 – Bree – In the blacksmith outdoor machine area, there is a forge. You have to turn the crank on it and the brick is your prize for when you finish.
Mithril Brick #3 – After finishing the Mines of Moria level, you are in one of the larger free areas of the game. As Legolas, find a set of blocks you can jump to in the water. Then, through shooting targets, jumping across gaps, and using poles to jump far, make it to a high ledge. There, destroy a box and the brick is yours.
Mithril Brick #4 – In the same large area as above, a winding path leads up into the mountains, take the right of the fork there and you will be in a round area with two wooden platforms and a wire set amongst trees. First, as Sam, you need to grow a plant. Then, as anyone, you must use the plant leaves to bounce up and grab onto the suspended wire. From there, climb across so you can drop down onto the first wooden platform. Then carefully jump onto the pole and then the second platform which holds the brick.
Mithril Brick #5 – Also in that same area as the two above, there will be a mithril brick outline you can see set between five plants. As a character with a sword, since I found the sword attacks easiest for this, you must destroy each of the five plants within five seconds per plant. It might take a couple tries, but your reward for finishing on time is the mithril brick.
Mithril Brick #6 – When you are in the first free roam area at the start of the Two Towers section you control Sam and Frodo on a mountain path. Instead of going forward, head down the path, so the bottom the screen, then on the right Sam needs to use his rope to pull apart rocks and the brick is inside.
Mithril Brick #7 – In the same area as number 6, on the left side of the path, as Frodo use his light and enter the small dark cave and you will pick this up.
Mithril Brick #8 – In Bree, as either Legolas or another ranger character with a bow, across the street from the inn, near the town exit, are 5 targets beyond a fence. Jump onto the platform on the path side of the fence, hold down X to have all 5 targets aimed at, and then shoot them. When all 5 are hit, the mithril block appears on the patform you should be on.
Mithril Brick #9 – Just outside of Bree from the exit by number 8’s archery area, is a small graveyard. As Sam, dig up the three spots in front of gravestones. Then, hold B to put each of them together. The mithril brick will appear once both steps are complete.
Mithril Brick #10 – Also outside of Bree, near the graveyard is a path up to a field. On the right side of the field is a tree overlooking a lower area with a cave. You can jump onto the tree up above and hang from a rail. From there, jump to the next rail, then onto a vine and then finally onto a second higher vine and climb up a bit to get the mithril brick.

Part 2 of the Lego Lord of the Rings Mithril Bricks video guide shows #11 to #30:

Lego Lord of the Rings Mithril Bricks Locations Guide continues on Page 2 with #31 to #70.