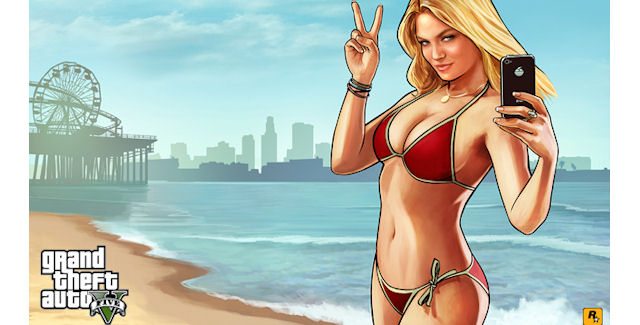 Synopsis from the characters in the trailer: “Michael is a retired former bank robber in his early forties who lives with his dysfunctional family on the proceeds of his former life in the upper-class suburb of Rockford Hills, based on Beverley Hills. Trevor lives alone in a trailer in the desert of Blaine County, his reckless and psychopathic behaviours being fuelled by a drug addiction. Franklin makes a living in Vespucci Beach — based on Venice Beach — as a repo man for an unscrupulous car dealership. The three acquaintances are drawn into Los Santos’ criminal underworld in the “pursuit of the almighty American dollar”

Developed by series creator Rockstar North, Grand Theft Auto V is said to be the largest and most ambitious title in the series to date. Set in the sprawling city of Los Santos and the surrounding area, Grand Theft Auto V delivers a world of unprecedented scale and detail bursting with life, from mountaintops to the depths of the ocean.

Are you excited for Grand Theft Auto 5?