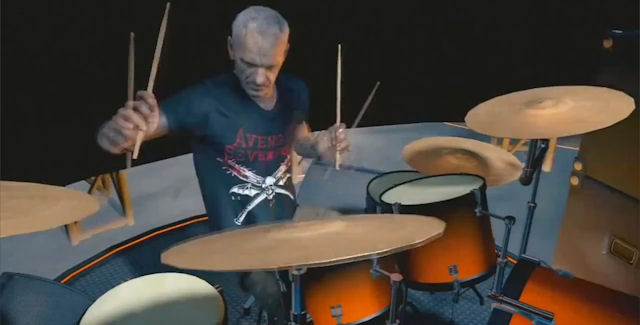 Let’s take a look at some Call of Duty: Black Ops 2 easter eggs! They can be found if you look hard enough! 🙂

Easter eggs have been confirmed for Black Ops 2. Watch videos of them all below.

Looks like Black Ops 2 developer Treyarch put together a fun outro Easter Egg for those patient enough to wait until after the game’s “Ending Credits” have rolled.

Note: At 2:20 minutes Woods is dancing in the audience at the same time he’s playing drums. Then at 3:22 minutes there’s a zombie at the left top of the stage!

There’s an Atari Easter Egg in the Nuketown 2025 map.

In “Mission 2: Celerium” you can find Thor’s hammer from Marvel’s Thor & The Avengers movies. At the start of this mission hug the left wall and move forward until you reach a small cave and enter the cave where the hammer is.

It’s hard to see Thor’s hammer so use Flash Bangs and Thermal Scopes to see this Easter Egg, as shown here…

Similar to the “Nuketown Mannequin Secret” in the last game, this easter egg returns for those who got the Black Ops 2 Pre-order/Limited Edition/Launch Week’s free downloadable bonus map Nuketown Zombies. Back in 2010’s original Black Ops, if you shot all the randomly-spawned mannequins’ heads off, then “Sympathy for the Devil” by The Rolling Stones would play the rest of the match. This time around something similar happens when you get up close and touch all the Teddy Bears on this map. A sound will confirm you’ve touched each Bear and then a song “Pareidolia 8-bit version from Black Ops Moon” will play!

In the last mission of the game, this Mini CLAW easter egg can be found on the desk.

This video will help you find out where the hidden voices are in the Nuketown Zombies map.

Open up the storyline of Tower of Babble by taken the many steps required to unlock and complete this easter egg. All steps are shown on our Black Ops 2 Tower of Babble Guide page.

Have you found any Black Ops 2 easter eggs?