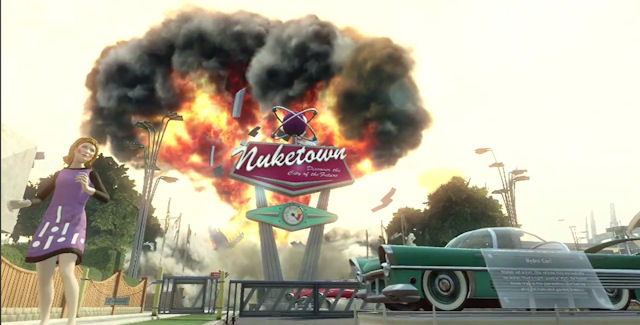 The Nuketown 2025 Multiplayer & Nuketown Zombies Map DLC Code only comes as a free Pre-order Bonus or with the Collector’s Editions (Limited/Hardened/Care Package) of Black Ops 2. Activision confirmed Nuketown 2025 is also included with each launch unit of Call of Duty: Black Ops 2, so if you get the game during launch week on Xbox 360, PS3 or PC (including Steam) it’ll include the DLC code to download the Bonus Map from November 13th, 2012.

Note: Although I’m guessing the map will become available at some point after launch for everyone to play, hopefully as free DLC.

Here’s the official “Welcome to Nuketown 2025” video that shows the map where a 1960’s-style vision of the “Model Home of the Future” is brought to life.

Description: An arena-style map with unique art design, Nuketown promoted the type of fast-paced action that Call of Duty fans from around the world have come to love. Now re-imagined in a 60’s depiction of the “Model Home of the Future” Nuketown 2025 is set to take that familiar close-quarters chaos into the future!

Here’s how to find the 4 playable Atari video games in the Nuketown 2025 multiplayer map.
To get access, you have to shoot the heads off the mannequins within 2 minutes and then you can hold the X button to play various Atari console games like Pitfall on the TV screen outside with an in-game joystick. Awesome!! 😀

It’s unclear as of yet if the PC version of Black Ops 2 will have a console command panel like there was in the the first Black Ops game.

For Example: If it returns, this could enable a cheat codes panel if you changed the config.cfg file with a text editor by setting “seta monkeytoy” to 0. Then pressing the ~ (Tilde) button in-game during Singleplayer would open up the console command panel. Then you could enter these cheats:
• /god (God mode),
• /give all (enables all weapons),
• /give ammo (enables full ammo for all weapons),
• /noclip (enables going through walls/everything), cg_drawfps 1 (enables show FPS).

Request: Please comment if any of these cheats still work in the Black Ops sequel too.

It’s unclear as of yet if the Xbox 360, PlayStation 3 and Wii U console versions of Black Ops 2 will have a secret computer terminal like there was in the main menu screen of the first Black Ops game.

For Example: If it returns, this could enable a cheat codes panel if you pressed the trigger buttons / spacebar repeatedly to free yourself from the chair and walk to the computer terminal. Then you could enter these cheats to access hidden content:
• DOA (Dead Ops Arcade game),
• ZORK (ZORK game),
• 3ARC UNLOCK (Zombies map),
• 3ARC INTEL (unlocks all Intels),
• and more if you typed HELP (list of commands).

This video shows how that worked in Black Ops 1.

Request: Please comment if anything similar is possible to enter cheats into the Black Ops sequel too.

Are you sick of the 80 Field Of View (FOV) lock in Black Ops 2? Don’t worry, the PC developers of Black Ops 2 at Treyarch have confirmed that “On the post-launch patch task list: 90 FOV”. That’s right, this allows you to see someone come THAT much sooner! Whether you spot someone as they try to get behind you for a knife kill or see someone turning a corner just as you move to look elsewhere, you’ll play all the better for it with this upcoming change.

Note: If you’re wondering why console gamers are set to 65 FOV, that’s because they are generally playing far from the TV screen and don’t need the wider angle, whereas PC gamers are usually much closer to their PC screen so they need the extra view room.

How To Quick Scope in Black Ops 2?

Here’s a Black Ops 2 Quick Scope tutorial with sniping tips, since it’s always a little different per Call of Duty game this serves as a nice introduction for snipers.

Call of Duty Elite is free for Black Ops 2 and unlocks a lot of great new features. Here’s the list:

Here’s an overview of how Call of Duty Elite will help unlock your maximum potential!

Here’s how to do an unlimited XP cheat to get Prestige super fast. The cheat can be done online (and offline?).

How-To Guide: “To use this glitch to your benefit (until it gets patched by Activision) you will need Two players on opposite sides of the team. One player has to have a trophy system and the scorestreak loneStar. The second Player has to have the black hat. Player one throws the trophy system on the floor in front of player 2. Now have player 2 capture the trophy system with the black cat. Player one has to quickly shoot the captured trophy system then unleash the loneStar. Player two will now receive a massive amount of XP. If player one is killed while controlling the lone Star the exploit will stop.”

Watch the video guide for the unlimited XP cheat:

That’s it for now. Expect more cheats & extras to be added to this page after launch week, as they get discovered.

There are no other Black Ops 2 cheats on PC, Xbox 360, PS3 & Wii U yet. So until more are discovered, we made some handy Black Ops 2 guides listed at the top of this page to help you with tips and tricks for the game!

Do you know of any Black Ops 2 cheats or unlockables?
Let us know in the comments, you’ll get credit for finding out. – Thanks for visiting!