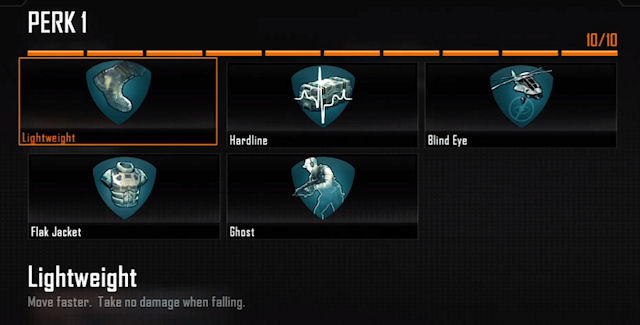 Black Ops 2 multiplayer designer, David Vondehaar, has been quoted as saying the new Perks System progress is simplified yet expanded.

I can nerf perks and I will, mark my words. A perk should never be something you need just to compete. A perk is ‘I got a parking spot,’ or ‘the soda machine gave me free soda.’ Your life shouldn’t depend on it. The community helped me understand that, and that’s why our new system has no absolutes. We can try to make it the most balanced CoD ever.” This is why there’s no more Last/Final Stand nor Second Chance in multiplayer.

Here’s the Call of Duty: Black Ops 2 Perks list in alphabetical order. This guide shows you when you can unlock each perk.

This video guide shows a breakdown of all the Perks in Black Ops 2:

Which of the Black Ops 2 Perks is your favorite?