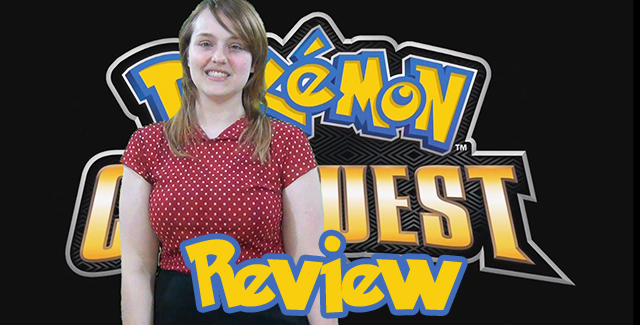 Thanks for stopping by for my Pokemon Conquest review. In this video review I will discuss my impression of the story, gameplay, aesthetics, and audio of Pokemon Conquest. I will also reveal what I consider to be the best and worst aspects of the game. Finally, I will give my recommendation of who I think would enjoy this game.

I love Pokemon. I love RPG tactics games. I love Japanese History and I love campy anime. Pokemon Conquest is like a delicious smoothie, with all of these elements perfectly blended together. The 17 kingdoms of the Ransei Region are an obvious representation of Feudal Japan. The Warlords and Warlord Leaders are named after figures in Japanese history, the main antagonist is based on the real Oda Nobunaga, who initiated the unification of Japan during the Warring States period. Pokemon Conquest parodies history, Warriors and Warlords from all over the region battle each other for glory and to fulfill a legend that has foretold that the person who unifies all of Ransei’s kingdoms will encounter a Legendary Pokémon, the creator of the Ransei Region. The player is given a gender choice and assumes the role of Warlord of the Aurora kingdom and with new friends, including Oichi and her Jigglypuff as well as the players loyal, childhood friend, Eevee. Together, they journey through the kingdoms, conquering and unifying the other nations, recruiting other warlords and their Pokemon.

Individual Warlords and Warlord Leaders can join the player’s party, each bringing at least one Pokemon to the party. These warlords can be assigned to protect conquered kingdoms, which can be attacked by neighboring regions. Each Kingdom has different climates with areas to catch wild Pokemon and investing gold earned in battles in the local shops and habitats and mines will produce more wild Pokemon and better items.

Pokemon Conquest falls in line with the simple, colorful aesthetic pervasive in the Pokemon series, but with a historical, Japanese stylization of the characters and environment. Overall, the game looked clean but very basic. I can appreciate a simple design, as long as the gameplay is the focus of the game, which it is.

My favorite aspect of the game is that there was more stories to explore, outside of the main storyline. After I beat the game, I was pretty sad it was over, even though it was certainly enough game. I just didn’t want it to be over. Getting to see the setting from the perspective of the other Warlords was exactly what I wanted, I just didn’t know it until i got it.

The worst aspect of this game is very minor, barely even a problem, but I would have liked to see a bit more diversity in the character design. Several characters share the exact same design, not even a color swap. It’s very minor but something I noticed could use improvement.

After beating the main story, there are 32 special “episodes”, each featuring one of the other warlords and having different objectives, such as taking over a portion of Ransei rather than the whole region. They feature smarter AI, with the opposing nations attacking your countries more often, the ability to upgrade the locations within the regions through a bank to find more Pokemon or get better items, and the ability to evolve the rest of the Warlords. After the episodes of the 16 senior warlords are completed, a final episode is unlocked. It is essentially a new game with the main playable character with all the added features of the post-game episodes.

Pokemon Conquest is very different from a typical Pokemon game, featuring turn-based strategy, with different Pokemon being capable of different attacks and means of movement. Each Warlord also has various battle-changing powers that boost their Pokemon’s powers.

I recommend this game to fans of Pokemon games, Pokemon Conquest still has the charm and fun of a Pokemon game. The tactics aspect of the gameplay gives this game a new twist that any strategy game fan will enjoy. Pokemon Conquest can be a good way for Pokemon fans to try a new genre or for tactics games fans to drink the Pokemon Kool-aid. The lighthearted story and loveable characters makes this game appropriate and fun for most ages. As long as gamers go in, knowing what to expect from this game, they will have a great experience just like me.