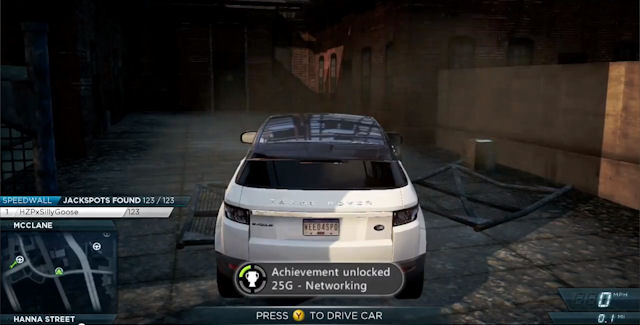 Welcome to the Need for Speed: Most Wanted 2012 Jack Spots locations guide to find the total of 123 Jack Spots in the Xbox 360, PC, PS3, PS Vita & Wii U open world racing game.

A map of the in-game locations where the Jack Spots are found is shown in the guide below.

Fairhaven’s street racers have located Jack Spots around the city. Find these and you can get behind the wheel of some of the finest automotive engineering ever to grace the road. As each vehicle has its own set of 5 races, you will have to find and drive all these cars before you can truly claim to have mastered the streets of Fairhaven.

Once you have found a Jack Spot, you can jump into the vehicle through Easydrive, but beware! Driving a car away from a Jack Spot will trigger its alarm. If the FPD see you while the alarm is sounding, they will move to pursue you.
Stuck in a pursuit? Then switch your vehicle at a Jack Spot without being seen to get away. This tactic won’t work in Ambush though; in Ambush events you will just have to use your skill and wits to get away.

How To Unlock Shortcuts To Jack Spots:
You can change your car by driving to a Jack Spot, or by jumping to one through Easydrive. Select the view you want to see it on on the map.

But there’s a quicker way too… Do you have Xbox 360 Kinect? Then you’re in luck! If you want to locate the nearest Jack Spot, then call out “Jack Spots” to filter the map down to showing just those locations.
To select a destination, move your cursor over it. You can then choose to jump straight there, or display a route to take you to it.

Car Jack Spot Switching Tip:
Make your car switches smoother with Kinect.
Drive to the Jack Spot and say ‘Jack’ when close to the car to switch between vehicles.

123 Jack Spots Locations On The Map:
You can see all of the Jack Spots on the Need for Speed: Most Wanted 2012 map below. – Click the thumbnail for the full-size image: 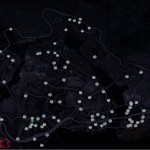 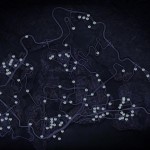 This video guide shows you where all of the Need for Speed: Most Wanted 2012 Jack Spots locations are on the map and in-game in Fairhaven.

Tip: Security Gates conceal escape routes, Jack Spots and other goodies. So make sure you take down security gates to find out what they are hiding. Plus it’ll gain you Speed Points as a bonus!

Thanks to SillyGooseGaming for the guide video and to Mcanedo & Gegge for creating the maps.

Please comment if you have any Need for Speed: Most Wanted 2012 Jack Spots location tips of your own, we’ll give you credit for it. – Thanks for visiting!