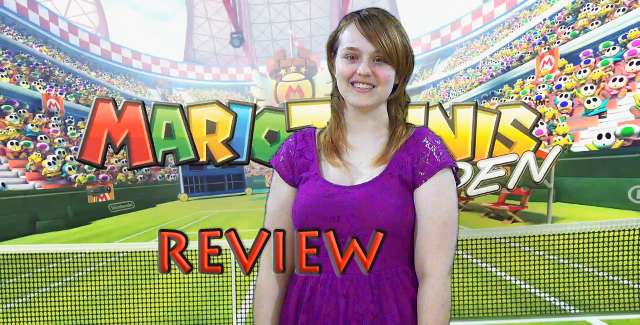 Thanks for stopping by for my review of Mario Tennis Open. In this video review I will discuss my impression of the story, gameplay, aesthetics, and audio of Mario Tennis Open. I will also reveal what I consider to be the best and worst aspects of the game. Finally, I will give my recommendation of who I think would enjoy this game.

Story
Somehow I managed to live all of these years without playing a Mario tennis game. After playing Mario Tennis Open for the 3DS I don’t think I’ll have any regrets. If I use the word plot very, very loosely Mario and the rest of his Mushroom Kingdom friends are invited to participate in the Mushroom Cup Tennis Tournament.

Gameplay
I was immediately disappointment when I started playing Mario Tennis Open and realized Birdo, my favorite Mushroom Kingdom character, was not included in Mario Tennis Open. I settled on Princess Peach who character supposedly relies on technique. All of the characters are labeled with a certain skill, including: all-around, power, defense, speed, tricky, and technique. I would’ve been even more disappointed that, of the roster 10 playable characters, only two are female and both of their skills are technique, which makes them basically the same character. However, after playing with one character of each type of skill it doesn’t seem to make that much difference to gameplay. Each match feels the same no matter what character the player plays as or faces in a match. It didn’t take long for me to realize any character can be defeated with the same basic court movements.

The player always start serving and from there the scoring is based on real-world tennis rules. They’re two different views for the player to use during a match. By holding the 3DS upright, the camera zooms in behind the player and then tilting right or left changes the direction the ball is hit in. By holding the 3DS flat, the camera pans out to get an overview of the court but cannot control the direction in which the ball is hit. On the touchscreen are the available types of serves the character can hit the ball with. Each type of serve has a corresponding button or combinations of buttons, so using the touchscreen is optional. As the ball is served back by the opponent certain points of the court, called chance areas, will light up. Those points are where the strategy of the game comes in giving the player and chance to execute a supercharge shot. Each of these chance areas also correspond with the available type of serves a player can perform on the touchscreen or with the buttons.

After the first two matches in the first Tournament, I had totally picked up the game, I had my technique down, I knew how to play with the character I chose. Then, I waited for the game to start getting challenging. It never did. Whether I was playing against a fast character like Diddy Kong or a power character like Bowser, who of course was the last character in the last Tournament, I could use the same exact attack and defense method of playing with nearly identical reactions from all of the characters. To be challenged at all, I had to win the first 4 Tournament Cups to become a “Star Player” and move onto the Star Tournament. Even then, I still didn’t feel that the characters faced had enough of a difference between them to keep the game interesting.

Aesthetic and Graphics
As with most Mario games, Mario Tennis Open is colorful and cute and wile the 3D effect actually looks good it’s kind of hard to use while playing because part of the strategy is turning the 3DS right and left which causes the 3D effect to become distorted. One thing that was undeniably freakishly adorable was watching to play tennis with the little stubby arms holding the tennis racket. I don’t even know what he was holding the tennis racquet with but it was really really cute.

Audio
Overall the music and Mario Tennis Open is pretty good and I especially like the fast-paced almost 80’s pop punk rock music and some of the ice flower cup levels. Given that most of the gameplay is fairly rinse-and-repeat the music injects a much needed dose of energy into the game. Whatever small amount of voice acting is the game is just the same small catchphrases that the characters used in pretty much every recent Mario game.

Fun Factor
My favorite aspect of the game is a mini-game that is a tennis twist on the classic Super Mario Brothers game. The object of this mini-game is hitting the ball against a moving back drop of the levels inspired by the original Super Mario Brothers for the NES. This mini-game, unlike the main game, is extremely challenging and the different characters skills are a lot more important. I found that Yoshi was the easiest character to use because his speed is helpful with the timed aspect of the mini game. This mini-game starts off challenging and as the player progresses new levels of difficulty are unlocked.

The worst aspect of this game is how repetitive and easy the main Tournament mode of the game is. It’s great when a game is easy to figure out, but the need for strategy was lost. If I’m winning but not being challenged, I’m not having any fun that is a major problem. I like to feel like I’m earning my victory.

Replay Value
Aside from the single player Tournament mode there is a lot more to Mario Tennis Open. There is both a local and online multiplayer mode in which four players can connect online for singles or doubles matches. Doubles can also be played in the single player mode which freshens at the Tournaments for maximum replay ability. The player can also at any time pick a court and opponent and set up a single or doubles match outside the Tournament in the exhibition mode. Aside from the original super Mario Brothers tennis game I mentioned earlier, there are also three other special mini-games.

Ingenuity
I did like that the developers trying to add variety by giving each character that own strengths and weaknesses and giving each court its own effect on the gameplay. I wish this aspect of the game had been brought to the forefront and given the game more unique experience with options and would greatly increase the replay value of the game.

Recommendation
I recommend this game to young children and people who don’t like a lot of challenge in the games. This is a simple game that is easy to pick up and play for anyone.