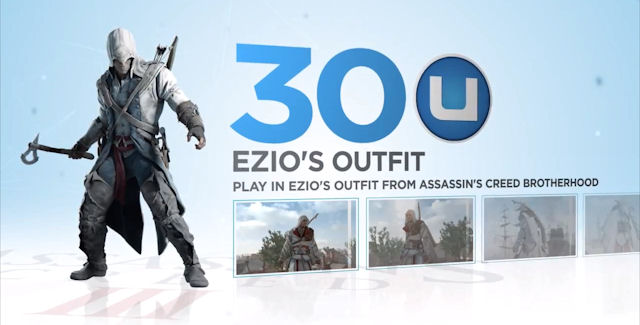 Before you start playing Assassin’s Creed 3, be sure to login to your existing Uplay Account via the game’s Main Menu, by selecting “Uplay”. If you’re not registered yet to Ubisoft’s official rewards service, then first sign up for an account at uplay.com.

Discover the exclusive Rewards you can unlock in Assassin’s Creed 3 with your Uplay account. Enhance your tool pouches, pay homage to Ezio Auditore da Firenze, or bring fear in your enemies in Multiplayer with the Renegade costume for the Night Stalker.

First, you must earn Uplay Points…

Perform these Uplay Actions to get Uplay Points for in-game Unlockables:

Second, you can buy Unlockable Cheats…

Here are the Uplay Rewards you can buy with Uplay Points to Unlock Cheats:

Buy the PS3 version of Assassin’s Creed 3 to get the PS3 Exclusive Benedict Arnold Missions arc. An hour’s worth of extra gameplay!

Benedict Arnold’s secret plot to betray West Point and sabotage the American Revolution earned him the ultimate mark of infamy: a name that will forevermore be synonymous with deceit and treachery. The most reviled turncoat in American history will be virtually resurrected in Assassin’s Creed III to pay his dues once more — but only on PlayStation 3.

The PS3-exclusive single player four-mission arc begins with a special request from General Washington in exposing a rumored plot to overthrow West Point, a critical link in the defense of the Colonies against Great Britain. Across four missions, Connor will flush out Loyalist spies and work undercover for Benedict Arnold, culminating in a full-blown assault on West Point that Connor must halt at all costs.

How To Unlock The Epilogue Missions

In turn, completing each of the epilogue missions will get you the “Fin” 30G Achievement / Trophy.

Here’s where you can enter the Konami Code into the game to give a turkey an Assassin’s Hood!

At any point during or after Sequence 6, Connor can go to the Davenport Homestead manor. Once there, stand around the corner to the left of the front of the manor and whistle. A turkey will sneak up on you from the bushes behind you.
To reveal the turkey is secretly part of the Assassins, you should stand in front of the turkey and press the Konami code in-game: Up, Up, Down, Down, Left, Right, Left, Right.
This will feed the turkey and give it an Assassin’s hood! It’ll also keep following you around everywhere. To see how it’s done, watch this video:

Aside from being able to unlock Multiplayer Characters in Assassin’s Creed 3, you’ll unlock additional items, as well as Abstergo & Erudito storyline videos & files, as you gain XP (to just over 713,000) to level up your character to Level 50 in multiplayer. Continue on to Level 99 in Prestige Mode to unlock additional emblems, portraits, titles and further customization parts.

Ubisoft explains why they added paying for leveling up in multiplayer:
“The Erudito Credits are a new way of unlocking content in Assassin’s Creed 3?s Multiplayer. People who have little time can use Erudito Credits as a shortcut to unlock game items from level 1 to 50 (excluding Prestige levels and relics rewards). — This is not mandatory, all items sold in Erudito Credits are also available in Abstergo Credits and can be unlocked through normal progression like previous years.”

I think they should’ve added a shortcut cheat for fans who wanted to see the Abstergo story cinematics, but didn’t want to spend dozens of hours playing multiplayer.

Other than that, there are no more Assassin’s Creed 3 cheats on Xbox 360, PS3, PC & Wii U yet. So until they are discovered, we made some handy Assassin’s Creed 3 guides listed at the top of this page to help you with tips and tricks for the game!

Do you know of any Assassin’s Creed 3 cheats or unlockables?
Let us know in the comments, you’ll get credit for finding out. – Thanks for visiting!