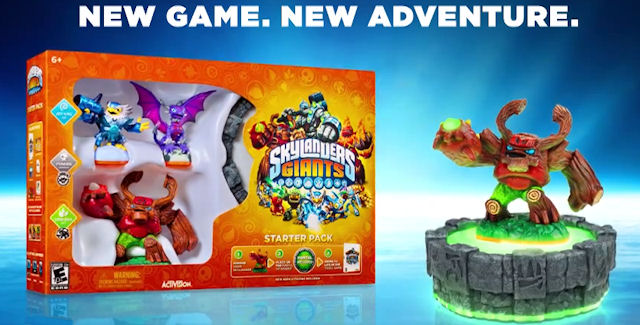 Welcome Portal Masters! This Skylanders Giants walkthrough will guide you through the beginning to ending moments of gameplay with strategy tips for this Action Platformer on the Wii, Xbox 360, PS3, PC, Mac, 3DS & Wii U.

Let’s start the Skylanders Giants walkthrough with an introduction video by the game’s creators at Toys For Bob!

Please note that viewers must be at least 7 to watch, so no harm comes to those with innocent eyes. This game includes Cartoon Violence.

Frozen in our world. Alive in theirs. Thousands of years ago, the Skylanders Giants fought epic battles in Skylands, but were banished to Earth. With a new threat looming, it’s time to bring them back to join forces with the Skylanders. Only you can put them on the Portal of Power to unleash their strength in the ultimate battle to save Skylands.

Bring the Skylanders to life by placing them on the Portal of Power. Build the ultimate collection of Skylanders — over 45 Skylanders to collect! Each Skylander has their own unique powers and abilities to enhance your game play experience and save Skylands.

Play anytime and anywhere: in the video game, online and on your mobile device.

How to “Save” the game without losing progress?

When saving the game Skylanders Giants on Wii, there are two things to keep an eye on if you want to continue playing the story all the way to the end:

Saving Tip #1. You have to finish the chapter you’re on, after the chapter is finished you have to press the + button on your Wii Remote Controller (I call it the Wiimote) and then select Main Menu for the game to save your progress. Then you can safely turn off the game.
Additionally, if you’re playing on the Xbox 360, you need to make sure you’re signed in with your username/avatar before you start playing the game, as well as picking the storage device and then the game will auto-save at the end of each chapter. Same for the Wii version the game will auto-save.

Saving Tip #2. After turning the game off, when you turn the game on again the next time, most people try to continue by going to chapter select, but don’t do that! Instead you need to talk to (depending on the chapter you’re on) Captain Flynn or one of the Molekin, who can all be found on the ships main deck, Flynn is up the steps by the steering wheel. This should continue the story where you left it last time.
Tips thanks to Sean, J-Viper & Samerste.

Wait, what? So how do the toys virtually transport into the video game?

The mystical Portal of Power station serves as a gateway between our world and the amazing world of Skylands, allowing you to ‘Bring Your Toys to Life’ by teleporting real-world toy characters directly into the game for players to control when placed upon the Portal of Power.

They aren’t just toys—they’re toys with brains. Skylanders figures unlock their own heroic challenges and remember all their in-game experiences, so they can be played on and across all major gaming consoles! – The great thing about this sequel is that the newly added Giants are super-sized, super-powered Skylanders. They do all the things Skylanders can do, like remember their in-game experiences, plus special powers that only Giants have!

Putting two Skylanders on the Portal activates additional game modes that extend the game even more!

What are the 8 different character’s Elements?

The eight elemental classes each characters belongs to one of are: Earth, Air, Fire, Water, Life, Undead, Magic, and Tech.

What’s the difference between the Wii and future Wii U versions of Skylanders Giants?

Here’s a developer walkthrough about how Skylanders Giants on Wii U uses the Wii U GamePad to add unique touch & on-screen features to your Skylander experience.

Note: The Wii U version of the game won’t be released until November 18th in America and November 30th in Europe.

Chapter 1: Time of the Giants

Tip: Giant Skylanders can lift large boulders to get them out of the way, so you can enter hard-to-get-to areas that sometimes have money up for grabs.

Note: In-game you can’t control the camera and there’s no jump button, but thanks to jump platforms, you can get up to higher areas. Sometimes if you see a pink cross on the ground instead of a jump pad, then you’ll first need to defeat the enemies in the area to activate the jump pad allowing you to keep going.

Chapter 1 Boss Fight Tip: To free the Mabu slaves, you must defeat the Arkeyan “Conquertron” boss by breaking all three chains that support this giant robot in the sky.

Opening Elemental Areas Tip: In order to open up all the Elemental areas in Chapter 1, you’ll need to use the new Giant Tree Rex’s Life element. Luckily he comes with the game’s Portal Owners Pack / Booster Pack, as well as the Starter Kit for newcomers to the series.

Tip: Complete the Chain Pull Feat of Strength with a Giant by pulling slowly. Take your time and you’ll be a Chain Champ soon enough! Finishing it successfully will give you access to the next level.

Tree Rex Tip: Hold down Tree Rex’s main attack buttton for a while and then the ground? pound will do lots more damage!