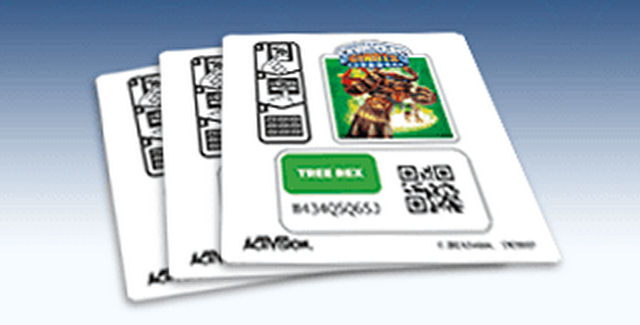 You can use the QR code card shown at the top of this page to see if you can activate Tree Rex.
Here’s what the official website says the Skylanders Giants cheat to unlock Tree Rex is: B434QSQ653.

Take note, while you can normally change the difficulty between Chompy Cuddler (Easy) / Cyclops Crusher (Medium) / Heavy Hitter (Hard) in the Pause Menu’s “Settings” under “General” by going to “Adjust Difficulty”. In Nightmare difficulty you won’t be able to change between the various difficulty modes at any time, and you’ll have to stick to this super hard difficulty level throughout the entire game for an extra challenge. But by the time you unlocked this you’ll be on your second playthrough already, so you’ll be fine.

Here are some Nightmare Mode tips:

How To Perform Destructive Wow Pow Move With LightCore Skylanders

Skylanders Giants introduces new LightCore Skylanders that glow when on or near the Portal of Power – no batteries required. Fan-favorites from Skylanders Spyro’s Adventure return as Series 2 characters featuring an all new “Wow Pow” upgrade power as well as the choice of more than one upgrade path.

What’s cool is that this “Wow Pow” special move only activates the first time you bring your LightCore Skylanders into a level. So if you’re in an area with lots of enemies surrounding you and you don’t want to fight them off one by one, then you can put your LightCore Skylander (for example: Eruptor) on the Portal of Power to transport him into the area you’re in. Then as he/she lands on the ground the LightCore Skylander will do a huge ground-pound attack that has a blast effect that takes out ALL the enemies on-screen! “Wow Pow” indeed!

See how the special “Wow Pow” move is done at 4:40 minutes into this video:

Do you know of any Skylanders Giants cheats or unlockables?
Let us know in the comments, you’ll get credit for finding out. – Thanks for visiting!