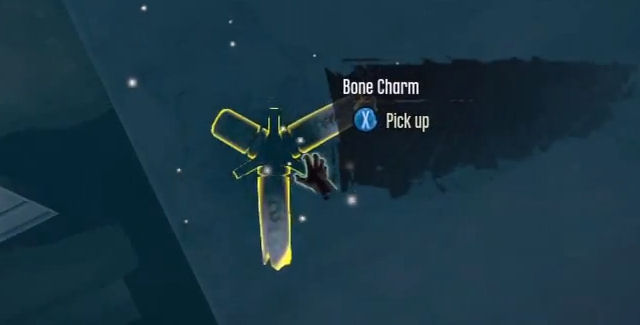 Each Dishonored playthrough is said to spawn 12 Bone Charms, but there are 40 or 45 total Whalebone Charms. Finding 10 Bone Charms locations and picking them up will help unlock the following Achievement / Trophy:
* “Occultist” (20 Gamerscore / Bronze Trophy) — You collected 10 bone charms.

According to the game: “Collecting Runes and Bone Charms is considered heresy by the Overseers.”

The Bone Charm locations are shown in the order the player can chronologically encounter them.

How can I get more Bone Charm Ability slots?

Answer: While exploring Dunwall you will also find Bone Charms, a lesser version of Runes that will enable you to boost some of your abilities. You can only equip a limited number of Bone Charms at any given time, though this limit can be increased during the course of the game. You start out with 3 Bone Charm Ability slots, but you can buy more at The Hound Pits Pub.

Answer: The Heart is a supernatural item that Corvo carries with him, that he channels psychic abilities from; which he hears as secrets pulled from the minds of others’ consciousness and such mystical senses. Bone Charms emit a faint “singing” sound.

When equipped — quick select it by pressing Down on the 4-Point Directional Pad of your controller / via the Quick-Access Wheel — The Heart beats faster when Corvo faces his objectives or Bone Charms. It works as an early detection system of sorts. So as you walk into new areas or rooms, select The Heart to find out if there’s a Bone Charm nearby.

But be warned, there may be a downside to using The Heart.

The 5 Bone Charms in Mission 2: “High Overseer Campbell” are shown in this video guide:

The 2 Bone Charms in the Mission: “Return to Dunwall Tower” are shown in this video guide:

The 5 Bone Charms in Mission 3: “The House of Pleasure” are shown in this video guide:

Collecting Bone Charms is essential, as the Bone Charms will give you new permanent skill enhancements. They include the following…

Thanks to Bethesda, Paul, Icenjam & Wikia for the guide videos and tips.

Please comment if you have any Dishonored Bone Charm location tips of your own, we’ll give you credit for it. – Thanks for visiting!