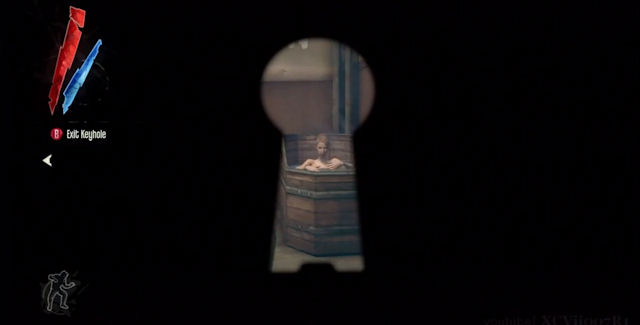 Let’s take a look at some Dishonored easter eggs! They are pretty funny! 🙂

Arkane Studios’ Dishonored game has been influenced by the PC classic Thief: The Dark Project. To show their appreciation of the game, the studio included a little easter egg.

You can find it in Mission 7: “Flooded District” at Daud’s Base. Once there, look for the two guards in training. The speech you’ll hear is pretty much identical to the tutorial mission from Thief: the Dark Project.

This video shows both the original Thief scene and the easter egg in Dishonored:

There’s a Portal easter egg in Piero’s workshop, if you go upstairs there’s a door with what appears to be a portal painted on it and some writing on the wall next to it. It’s called “Piero’s door to nowhere” and the accompanying text slyly suggests after Dishonored Piero went on to create the Portal guns. – Thanks for the tip Unorc!

Callista Curnow, the Empress daughter’s caretaker, who is voiced by Leena Heady (“300,” “Game of Thrones”) has some funny lines when you walk in on her taking a bath.

You can find it after Mission 3: “House of Pleasure”. Corvo caught Piero looking through the keyhole while Callista was bathing. He’s a regular ‘spymaster’ himself, peeping tom more like it haha. After entering the bathroom yourself; If you try jumping in the bath, it’s game over due to irreconcilable hostilities. But we both know you’re going to do it anyway, because of the funny dialog that follows!

This video shows all the dialogue options during this particular bathtub scene:

The Irreverent Wallace is the man servant to Count Pendleton. Approach him without talking to him throughout the game, to find he has some funny NPC dialog in Dishonored. Enjoy his Wallace-isms in this video.

Anton Sokolov shares the same surname as Nikolai Sokolov, from Metal Gear Solid: Snake Eater, who is a rocket scientist/inventor. That may be a coincidence, though. – Thanks for the tip Jack!

Have you found any Dishonored easter eggs?