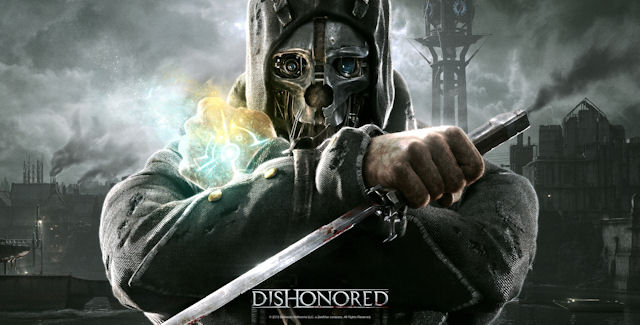 This Dishonored walkthrough will guide you through the beginning to ending moments of gameplay with strategy tips for this Action-Adventure Stealth game on the Xbox 360, PS3 & PC.

Dishonored is an immersive first-person action game that casts you as a supernatural assassin driven by revenge. Creatively eliminate your targets as you combine the supernatural abilities, weapons and unusual gadgets at your disposal. Pursue your enemies under the cover of darkness or ruthlessly attack them head on with weapons drawn. The outcome of each mission plays out based on the choices you make.

Please note that viewers must be at least 18 to watch, so no harm comes to those with innocent eyes. This game includes Blood and Gore, Intense Violence, Sexual Themes, Strong Language.

Dishonored takes place in Dunwall, an industrial whaling city in the grip of a terrible plague.

Dunwall, located on the Isle of Gristol, is the capital of the Empire of Isles, a collective of four nation-states, tightly grouped in an otherwise hostile ocean. In the years leading up to the plague, a new process was discovered for making whale oil more volatile, powering a series of astounding technological inventions.

Despite Dunwall’s technological prowess, the city’s elite have been unable to stem the epidemic that has plunged the once-great capital into chaos. Crime and gang activity are at an all time high, and the City Watch – armed with militarized security technology – have cracked down hard on the populace. Food, whale oil and elixirs designed to fight the plague have been strictly rationed. The situation is dire. This city is where you live… You, Corvo Attano, Royal Protector to Empress Jessamine Kaldwin.

Weeks ago, your Empress dispatched you to seek aid from Gristol’s neighboring nations. Leaving the city of Dunwall, you traveled to the other Isles – Morley, Tyvia and Serkonos. Now you return to her with dreadful news… and then the unthinkable happens, the Empress is killed in a coup.

Framed for her murder, you become an infamous assassin, known only by the disturbing mask that has become your calling card. The truth behind your betrayal is as murky as the waters surrounding the city, and the life you once had is gone forever. – You are the once-trusted bodyguard of the beloved Empress, still in Dunwall, an industrial whaling city where strange steampunk – inspired technology and otherworldly forces coexist in the shadows.

How can you play through Dishonored using stealth and without killing anyone?

While you can play Dishonored many different ways to suit your individual play style, this video highlights how the game’s stealth system works and highlights the tools and powers at your disposal to make your way through the game unseen by your enemies.

What are the main areas in the city of Dunwall?

Dunwall Tower: Located along the Wrenhaven River that runs through the heart of the city, Dunwall Tower is the home of the Empress and other important government figures.

Estate District: Built around a smaller tributary of the Wrenhaven River – referred to as the Serpentine – the Estate District is where Dunwall’s aristocracy resides. In the center of the district is an ancient walled structure, the Boyle Estate, home to one of Dunwall’s wealthiest families.

Holger Square: The site of the Office of the High Overseer is home to the leader of the predominant religious group across the Isles, The Abbey of the Everyman.

The Flooded District: Following the collapse of a water barrier, the buildings in this flooded district have mostly been vacated. It now plays host to thugs and thieves and supposedly, cultists and other practitioners of black magic as well. The City Watch has been spotted here dumping bodies of the plague-infected Weepers.

Kaldwin’s Bridge: This massive structure stretches across the Wrenhaven River. It was originally commissioned by Emperor Kaldwin, father of the Empress, but has been fortified in recent months with new Sokolov technologies.

Kingsparrow Island: This small island is located at the mouth of the Wrenhaven. A new lighthouse is currently being constructed here under the direction of the Royal Spymaster, Hiram Burrows.

What are the supernatural powers available in the game?

Each of these powers can be upgraded* to a second level to improve its functionality.

• Blink – Stealthily teleports you to a nearby location. Hold Right Mouse Button to activate the Blink targeting icon, aim the icon with the MoUse and release rIGht MoUse BUtton to Blink to the chosen location. Aim the Blink icon at ledges to reach higher locations, or combine Blink with a jump to pull off acrobatic maneuvers. Level two grants increased range.
• Dark Vision – Reveals the outline of living beings through solid walls. In addition to displaying an enemy’s field-of-view, Dark Vision also provides a visual representation of sound, making it especially useful for stealth. Level two highlights security systems and valuable objects.
• Possession – Physically merges you with any creature’s body for a limited time, allowing you to hide or pass through small spaces undetected. Level two allows for the possession of humans.
• Bend Time – Dramatically slows the world around you for a limited time, allowing you to fight or sneak more effectively. At level two, time is completely stopped, during which enemies and security systems will be unaware of you.
• Devouring Swarm – Summons a vicious swarm of rats that will consume corpses or attack the nearest living thing. Level two summons a larger, more vicious swarm of rats. Only one rat swarm can be active at a time.
• Windblast – Releases a powerful blast of wind, knocking your enemies off their feet. This power will also douse fires, shatter wooden doors and reflect projectiles back at the enemy who fired them. Level two increases the power of the blast.
• Shadow Kill – Each time you assassinate an unaware enemy, his body turns to ash. At level two, even enemies aware of your presence will turn to ash after being killed.
• Blood Thirsty – Allows you to build up Adrenaline by blocking attacks, performing assassinations or inflicting damage. Once Adrenaline is maxed out you can unleash a deadly attack. Level two increases the rate of Adrenaline buildup and enables a double-attack that kills multiple enemies.
• Agility – Enables you to jump higher. Level two allows you to run faster.
• Vitality – Increases your maximum health. At level two, part of your health regenerates.

*Upgrading these powers can be done via two witchcraft & two shop methods:
1. Runes – The Outsider’s power is channeled through artifacts carved from whale bones, called Runes. Collecting Runes allows you to spend them on accessing new powers. Choose your powers wisely, as Runes are a rare resource.
2. Bone Charms – While exploring Dunwall you will also find Bone Charms, a lesser version of Runes that will enable you to boost some of your abilities. You can only equip a limited number of Bone Charms at any given time, though this limit can be increased during the course of the game.
3. Shop Buying – With the city falling into chaos, any miscellaneous goods you find can fetch a high price on the black market. The money you earn from pawning these items can be used to purchase new equipment upgrades.
4. Blueprints – You will also run across Blueprints while exploring Dunwall. Collect them to gain access to advanced equipment upgrades. Once a Blueprint is collected, the matching equipment upgrade will be available for purchase at Piero’s workshop.

Dunwall is littered with technology that the City Watch employs to control the populace. Depending on the situation, you may wish to avoid, disable, or rewire these devices.

• Watch Alarm: When activated, this simple alarm system will signal guards in the area to search for you. Switch them off to end the search, or rewire** them to disable the alarm permanently.
• Watch Tower: Watch towers scan the surrounding area with massive floodlights, firing flaming arrows at enemies of the City Watch. Stay out of the light to pass by undetected, or find a way to climb up and disable them.
• Wall of Light: Only City Watch guards can pass through a Wall of Light without being instantly vaporized. Deactivate these barriers by removing their energy source, or bypass them using other creative means.
• Arc Pylon: Arc Pylons disintegrate enemies of the City Watch that come within their proximity. Like the Wall of Light, they can be deactivated or subverted in several ways.

**Rewire Tools: These are single-use items that allow you to hack city devices. Once rewired, alarms can no longer be sounded, while Walls of Light, Arc Pylons and Watch Towers will turn against the City Watch.

You have just returned from a journey of several months, visiting the other nations in the Empire to ask for aid in dealing with the Rat Plague. You must deliver their diplomatic response to the Empress, whom you serve as Lord Protector.

Six months have passed since you were accused by the Royal Spymaster of murdering the Empress and conspiring to abduct her daughter Emily, the royal heir. Now, locked away in Coldridge Prison, the time of your execution draws near.

Tip: Choices have consequences. Using stealth or the nonlethal approach will lead to a more stable, less dark city. The benefits are: Fewer rats and weepers, some people react favorably, and the final outcome of the game is not as dark.

Safety Tip: Remove the whale oil tanks from security systems like the Wall of Light or Arc Pylon to power them down.

Combat Tip: Block and counter-attack are essential combat skills. Keep this in mind as you fight enemies.

Stealth Tip: Go into stealth mode (crouch) to sneak past enemies or approach them covertly. Using darkness/shadows and silence helps.

You have escaped Coldridge Prison with the help of hidden allies. If you can reach the Wrenhaven River, they promise to aid you in your next move.
Hidden in an old bar on the river, your new allies have plans to share with you. Meet with the Loyalists’ near the inner circle to learn what they’ve got in mind.