At launch Resident Evil 6 shipped 4.5 million copies to stores worldwide since October 2nd, 2012; the strongest initial shipment of any Capcom title ever! Although these are not sales numbers to customers, millions of store purchases give a strong indication that interest is high in the Resident Evil franchise.

No doubt you can count on Capcom to make Resident Evil 7 if sales remain this high, they said as much in the quote at the top. Capcom itself expects Resident Evil 6 to sell a total of 7 million copies (compared to Resident Evil 5’s 5.8 million), making the latest sequel the company’s best-selling title yet. Capcom further announced that since the first Resident Evil game in 1996, the series has now sold over 50 million copies worldwide.

Capcom chairman and CEO Kenzo Tsujimoto recently told investors that: “We want to reduce the time needed to develop major titles from the usual three-to-four years to only 2.5 years. Speeding up development will probably raise the cost. But creating quality content will be vital to Capcom’s ability to survive by overcoming intense global competition.”

“Our goal is to reduce the cycle to 2.5 years for subsequent titles in this series.” -Capcom CEO

The Capcom CEO added: “Our goal is to reduce the cycle to 2.5 years for subsequent titles in this series.”
For reference: After Resident Evil 5, Resident Evil 6 was in development for 3.5 years. Hence Resident Evil 7 will likely launch in 2015. The DMC Devil May Cry and Lost Planet franchises are getting a similar treatment.

Resident Evil 6 executive producer Hiroyuki Kobayashi this week talked about the difference between what Resident Evil fans want and how they envision the future of the series. To quote: “The way I always think of it is that if Resident Evil represents a child, then the fans and us as creators are the two parents. The resulting games are like the children that are born between both of us. And just like real parents, you’re not always going to agree on what is best for raising that child.”

“It’s our job to create a new gaming experience and to offer them something that’s fresh and challenging. We want to make sure that what we do pleases them, but the initial reaction might not always be positive. We do listen to the fans, but we can’t be beholden to them at every turn or I don’t think we’ll ever make progress in terms of the series’ development.” So they do take fan feedback into account, but they want the series to appeal to a worldwide audience at the same time. 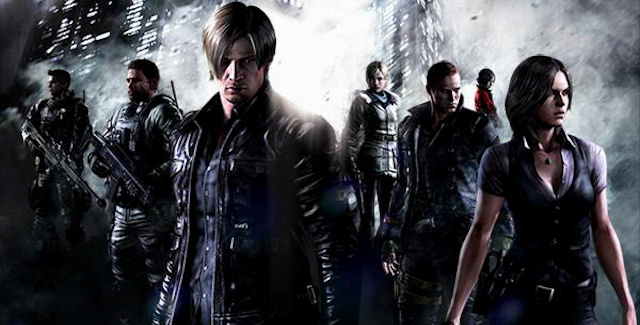 “A job huh? Sure. My schedule just cleared up.” -Ada Wong

While Ada successfully destroyed Carla Radames’s Neo-Umbrella lab in Langshiang, this will obviously not be the sinister organization’s only lab they have. In the Ada Wong Campaign ending she receives a call from someone with a mission. Ada takes it, saying “A job huh? Sure. My schedule just cleared up.” Hinting she’ll be back in Resident Evil 7! Who (from the BSAA or otherwise) do you think called her up? Leon Kennedy?

Then as Ada’s Campaign ending cutscene finishes the Achievement/Trophy for completion pops up with an important question “What’s Next?” for the Resident Evil series. This then leads into the credits after which the game isn’t over yet…

In a post-credits scene after Ada’s Campaign ends, the secret ending shows an underdeveloped country somewhere, with a small boy trapped in a house by B.O.W.’s. Jake asks if the boy has his price, to which the boy passes him an apple. In this open-ended Epilogue, Jake then goes outside and proceeds to defend the boy from the attacking B.O.W.’s. Hinting he’ll be back to save the world from zombies and other mutations in Resident Evil 7!

Who do you want to see star in Resident Evil 7? As mentioned, our Resident Evil 6 teams likely? only took out Simmons, Ustanak and Tentacleman, but not Neo-Umbrella itself! Will Ada, Leon, Jake, Sherry, Chris, Jill, Helena, Claire and the rest return in new duo’s to stop and completely destroy Neo-Umbrella?

I imagine there’ll be a lot of interest in the romantic pairings of partners like Leon & Ada and Chris & Jill. Although a heroine combo with Claire & Jill teaming up for a main campaign – like the cover image at the top shows – would be awesome too! With Albert Wesker dead, perhaps they’ll take on an immortal Alex Wesker who might be the mastermind behind new zombie-attack events, I mean, what else has he been up to all this time?

At a London event for Resident Evil: Revelations he said the following about the next Resident Evil game:
“I think that it’s important for us to have users’ needs in mind when making the games. At the same time I think a lot of what people want now is to have Chris and Jill in a game, or they want it to look like Resident Evil used to look like. That’s what makes the game work for them. We should be able to start from scratch and reboot it. It would still be Resident Evil. We wouldn’t lose the essential nature of what makes it a good game just by changing the characters. […] The most important thing with a Resident Evil game is to bring across that feeling of horror and fear that’s such a part of the series.”

What are your suggestions for Resident Evil 7?